Year Published: 1951
Pages: 214
First Sentence: If you really want to hear about it, the first thing you'll probably want to know is where I was born, and what my lousy childhood was like, and how my parents were occupied and all before they had me, and all that David Copperfield kind of crap, but I don't feel like going into it if you want to know the truth.
Rating: 3/3 (read it!) 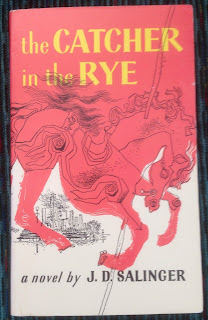 Review:
Up to now I feel like my reviews of books that are supposed to be my favourites haven’t exactly been glowing. A Clockwork Orange wasn’t as good as I remembered, or rather I wasn’t as willing to take it at face value nowadays. Good Omens was still good, but I just didn’t feel like reading in place of a large stack of books I was or am more excited about. But that changes now.

The Catcher in the Rye is a book that some people really love and some people really hate. It’s about a teenage boy named Holden Caulfield who gets expelled from his boarding school and takes a long, scary journey through New York and himself on his way home. He’s a smart, sensitive kid with a lot of anger and confusion, and a much-beloved dead younger brother.

I fell madly in love with Holden Caulfield when I was about his age*. I was dipping my toe into internet friendships, and someone recommended the book to me, otherwise I probably never would have picked it up. It was the perfect time for me to read it, though. My life certainly hadn’t been touched by tragedy, but I was a young, cynical misanthrope, and the conversational style of the book was engaging and startling. I’ve read books since where the first person narrator’s voice was stronger than Holden Caulfield’s, but back then I certainly hadn’t, and I was just ready to fall in love with someone anyway. I’ve always had a really hard time understanding why the haters hate this book, because I loved it so much. As far as I was concerned they were all a bunch of phonies.

Until I reread it.

Nothing much happens in the book. Holden wanders around feeling frustrated and uncertain about things, calling up different people in a way that is completely incomprehensible nowadays, running through his money like the idiot teenager that he is, doing all kinds of stupid things.  He’s pretty whiny. He’s a supremely privileged rich white kid. So I can see why the book would frustrate people, including other teens who often end up reading this book in high school English class (I was at an all-girls Catholic school and the content might have been a little bit racy for us, although I did read Morley Callaghan’s Such Is My Beloved in high school from an assigned reading list, and that has prostitutes in it too, so who knows).

But I still love him. I love him so much. I love this book so much, and I’m so sad that I waited so long to reread it.

I don’t even know what to say because I was so amazed. The point where Holden first mentions his dead brother, Allie, killed me. There are such gorgeous subtleties to the way that he tells his story and what he reveals unconsciously. Still, the book’s greatest strength is probably its length, because I’m sure a larger dose would end up being counterproductive (e.g. every single other novel about whiny white men that I’ve reviewed for this blog so far). I haven’t read any of J. D. Salinger’s other work yet, but you better believe that I’ll be changing that now. I also can’t say for sure whether I’d be having this reaction if I hadn’t read this book for the first time when I did. What it would be like to read initially as an adult reader is hard to say. The girl I was loved Holden and rereading this book woke up that girl a little bit, and made me think about what she was going through when she read the book, the way she felt in her school uniform, at home and in her city.

So this is one favourite that still has the power to knock my socks off, and for which my love has been rekindled.  I urge you to read it if you somehow haven’t yet.

*I think I read this before I read A Clockwork Orange but I’m pretty hazy on the actual chronology. Everything else written in this review will assume that that was the case, though.

Don't ever tell anybody anything. If you do, you start missing everybody.