First Sentence: Current theories on the creation of the universe state that, if it was created at all and didn't just start, as it were, unofficially it came into being between ten and twenty thousand million years ago. 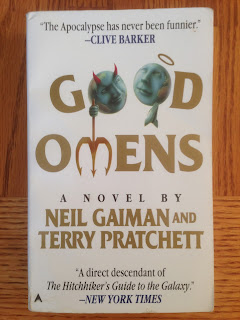 Review:
The first time I read Good Omens I was a preteen (about the age of Adam the Anti-Christ and his friends, The Them, in fact).  I’d just started attending my all-girls Catholic school, with a Sister as my homeroom teacher.  I borrowed it from a girl who was a friend of a friend at the time, and she’d borrowed it from her dad.  I decided that it was too irreverent to read on Sundays, and I think I only half-understood some parts.  Also, in the interest of full disclosure, I must admit that if memory serves, I didn’t exactly return it in good shape.  I haven’t always been a good book borrower.

This is the only book on my list of four favourites that I’ve reread before now.  I read it again when I finally bought my own edition of the book, and I read it when I went to Atlanta for Dragon*Con as a sort of comfort blanket, not knowing what to expect from my first convention.

If I’ve learned anything from this rereading process so far, though, it’s that even old favourites don’t necessarily react well to being read on schedule.  I enjoyed it again this time through, I remembered why I love the book and why it’s important to me, but I just really wasn’t that into it.  As usual, the book got a few actual chuckles out of me, and as usual I was pleasantly surprised by bits that I’d forgotten, but I didn’t feel like picking it up most of the time.

Once again I’ve talked too much about the book without actually describing it.  It begins In The Beginning, with the angel Aziraphale and the demon Crawly (who eventually changes his name to Crowley) at the Garden of Eden, watching Adam and Eve leaving the Garden behind them.  Then it runs forward to eleven years ago, with the birth and misplacement of the Anti-Christ by an order of Satanic nuns, and finally the “present” which is really more like when the book was published, and the approaching apocalypse.  The Anti-Christ is named Adam, but due to the mix up when he’s born, he ends up growing up relatively normally. He has three delightful friends.  Meanwhile, the four Horsemen (Horsepersons) of the Apocalypse are assembling.  The cast is rounded out by Anathema Device, witch (and professional descendant of the only accurate seer in history), and Newton Pulsifer, Witchfinder Private, plus a couple of others, but when do I ever list characters?

The book was written by Terry Pratchett and Neil Gaiman before their respective rises to fame.  It feels more Pratchett than Gaiman to me, but that could very well be because I have about 1000% more experience with Pratchett than with Gaiman (I’ve read American Gods and I’ve seen Coraline and that is literally it besides his blog which I eventually quit reading--oh, and Mirrormask, is that a thing he did?).  This is decidedly not Pratchett at the height of his powers, though, a statement I did a poor job of elaborating on in my review of Small Gods (published only two years after this, to my astonishment).

Crowley and Aziraphale were the standout characters for me the first time I read this book, but this time around they seem to have a diminished role compared to what I remembered.  Now that I’m in my late twenties, I found myself paying more attention to Newt and Anathema’s stories/y.

Did I mention that the book is really funny?  It’s a rare book that gets an “actual lol” from me, but this is one of them (see also: The Disaster Artist).  As for whether it’s too irreverent for Sunday reading, I’d hardly say so, but you might want to take my hard left turn toward agnosticism into account.  The book isn’t agnostic or even particularly blasphemous, though.  I suspect that the ideas in it did inexorably lead me to where I am today, with huge amounts of help, but I wouldn’t say that they’re any more likely to lead one astray than anything else that deals with God and faith and how to understand the world.
Posted by M.R. at 12/21/2015 05:00:00 PM