August has been a month with a lot of emotional highs and lows, I can say that much for sure. I finished the course I was taking, found out that although my current work project is/was coming to an end, the next one would once again be out of town, moved out of the workhome that I’ve been living in since late November 2013, and tried to enjoy some of the dregs of summer. I’m not exactly looking forward to the fall, but yeah, actually I am. This next year will be a transitional one for reasons I’m not quite ready to divulge, and I’m going to try to make the most of it.

Spy
This movie was a lot of fun! I hope we get more like it!

The MacDebate
For anyone unfamiliar, Maclean’s Magazine hosted this Canadian federal leaders’ debate with all the (English) party leaders. It was literally the only thing that cheered me up after I found out that I’d have to continue working out of town for many, many more months. Overall, though, the takeaway from that debate: this election campaign is way too long.

Dance Pants
I went to a play at the Saskatoon Fringe for the first time ever, and it was this one by a guy named Randy Rutherford (listed on his website as This May Feel a Little Funny).

Sense8
I’m not sure that anything really even happened in this show, but I loved it, and I’m very glad that there’ll be more of it. It just looks great, for one thing, and they’re playing with some intriguing concepts, and I want to watch all of these characters do things.

Sasquan
I really want to start going to WorldCons, but I didn’t make it to Sasquan this year, and I didn’t actually end up voting for any of the Hugos, because it was very bewildering for a first-time voter this year, what with all the drama. I’m saving up for some things at the moment, and no one was nerdy enough to go with me. 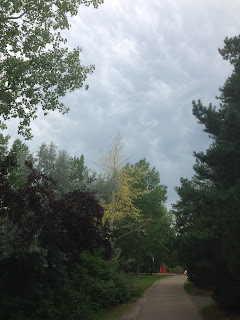