Stay tuned, kids. I'm pretty sure that I'm going to review Battle Royale and The Hunger Games, and then do a roundup of all three of these books. Mostly for my own enjoyment, but hopefully a bit of yours, too. -M.R. 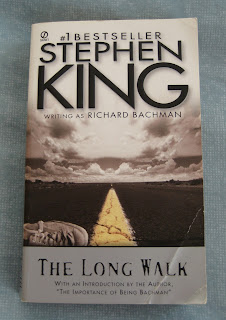 Review:
I am what you might call a compulsive reader. Certainly not as compulsive as some (I only read about thirty or so books every year, compared to others who read well over fifty), but what I really mean is that I am always reading a book: at any given time, I have a book on the go. I don't really bring books around with me during my daily activities, but I do always have one beside my bed, that I'm more or less taking a peek at every night.

My standards for the genres I love are, I think, fairly low, so with this ubiquitous reading, one of my few measures for judgement of a book's quality is how fast I actually read the book, whether I make time for it in the middle of my life, or if I just read a few chapters during habitual reading times, e.g. before bed.

Which is all just to say that I read The Long Walk over the course of three days. If I were to recommend it to anyone (AND I DO), I think I'd suggest waiting until you have a free day and reading the whole thing in one go.

Let's talk, then, about the actual book.

The Long Walk is about an event by the same name that happens every year in a not-quite-America. One hundred boys gather at the border between the United States and Canada, in northern Maine, and start walking south. They must walk without stopping, at least four miles per hour. If they don't do that, they get a warning. After three warnings, they get a ticket. A ticket is a gunshot to the head.

I loved this book from the first page to the last. Even, I should add, as it filled me with horror.

But before I go any further, I have to address the elephant in the room. Richard Bachman, you may know, is an alias of Stephen King's, used for a few of his early novels. In fact, based on the introduction to The Long Walk, King considered the alias a sort of alter ego as well, a person who could write the darker stories he wanted to tell. The Bachman books were almost all written a long time ago. This book, in particular, was apparently the first one King ever wrote, and it was published over thirty years ago.

Now, I am a big Stephen King fan. I've read under ten of his novels (I think), plus a couple of short story collections, but I just love his style. I like to think of it as "blue collar," which is a descriptor that's probably very easy to misinterpret. What I mean is that it's gritty, and it works. I would, though, probably go on record with a preference for his older work. It's not that I think he's gotten to be a bad writer (witness the recent success of 11/22/63). I just think that the major problem with his latter day works is that King has gotten lazy. The old stuff is full of the mundane made terrifying, and creeping dread. The new stuff is about rich writers encountering scary things (I'm looking at you, Bag of Bones).

So anyway, I'm not sure if there's anything that's more mundane than walking, at least for those of us who are able-bodied and do it every day. And I'm sure we've all had those excursions where we've walked too far, and then still had to walk that last mile on mushy feet with stabbing pains running up the heel. So then, as far as I'm concerned, it's trivially easy to extrapolate that to many many more miles, at gunpoint. So I had nightmares the first night after I started reading the book, anyway.

Ray Garraty is the novel's protagonist, a likeable kid who, as the Walk begins, teams up with a bunch of other pretty decent kids. We meet him at the same time as the others do, about an hour before the beginning of the Walk, and we get to know him and the other kids as it progresses. The novel is much less about plot (there isn't one, really; this may be the most pure road trip novel ever written) than about the interactions between the boys as it gradually dawns on them that all but one of them are walking dead.  King excels at distilling adolescence into prose, and this depiction of adolescents under extreme duress is amazing.

I'll wrap this up before it becomes the book review version of the Long Walk: just read it, goddammit.