Year Published: 2016
Pages: 432
First Sentence: You will criticize me, reader, for writing in a style six hundred years removed from the events I describe, but you came to me for explanation of those days of transformation which left your world the world it is, and since it was the philosophy of the Eighteenth Century, heavy with optimism and ambition, whose abrupt revival birthed the recent revolution, so it is only in the language of the Enlightenment, rich with opinion and sentiment, that those days can be described. 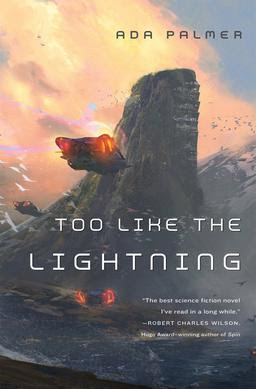 Review:
I really admire anyone who reviews science fiction and fantasy on a regular basis. If they have to give their readers some idea of what the book is about, they also face the necessity of explaining at least a little bit of how the world works in the book. I'm not very good at this, hence my relatively few attempts to do so thus far.

However, as I've mentioned fairly frequently of late, I do want to finish this project someday, and so from here on out I'm reviewing whatever I can, regardless of how hard it is for me (or when the book was written).

Ada Palmer's Too Like the Lightning is one of those sf novels that defy easy summarization. It's 2454 and Mycroft Canner is a Servicer, someone who has committed a crime and must pay their debt to society through actual labour, in exchange for food and a place to sleep. He/She/They (the pronouns in this book are deliberately all over the place) live in a society which has eschewed nation states, gender, religion, etc. in favour of affiliation with a handful of social structures called Hives, each with unique values and laws. Canner is involved in all of the plt threads of the novel, and there are many. One is the boy, Bridger, who appears to be able to do miracles and create life. ANother is some hard to follow political intrigue involving the various Hives vying for dominance. And so on.

Palmer is a historian (I only know this because I stumbled on her blog post comparing the two Borgia tv series before discovering that she also wrote this book). Her background shows. While some of her characters' obsession with the 18th century seems pretty arbitrary, I appreciate how well she's captured the alien perspective of people that are several centuries removed from the present time.

Mycroft Canner narrates the majority of the book, and I will say that while I enjoyed this novel immensely, the pace was... bizarre? There isn't a beginning, middle, and end so much as a long drawn out mish mash. There's no resolution to anything at the end of the book (in fact it ends with a revelation that the entire book has been building to without this reader being aware of it), which is somewhat annoying except that I already wanted to read the next book in the series anyway.

There are a lot of interesting themes being toyed with, although I think due to the lack of resolution in the novel, we only see that there's something there rather than figuring out what the novel is saying. I think basically the thesis here is that people find ways to divide and to compete regardless of what those ways are. But there's also stuff to consider about gender and its various definitions in different times and places, about labour, about criminal justice, and about family structures and children and what's natural vs healthy vs not.

I also think the character work is good, with the possible exception of Bridger, the miracle boy, who is 13 years old but written as a much younger child. I suspect that there's a reason for this, but it's not made clear in this book and I have to admit I'm not really on board with that choice. It seems writers often have the opposite problem with writing child characters much too precociously. We'll see how this plays out in the sequel.

Besides that, as I've said previously, I enjoyed this a lot and I plan to read the second book in the series, hopefully sooner rather than later. (At time of posting this review, I actually have read the second book, and have the third sitting on my book shelf ready to pick up soon.)
Posted by M.R. at 6/22/2020 12:00:00 AM

Email ThisBlogThis!Share to TwitterShare to FacebookShare to Pinterest
Labels: : Random, Author: Palmer (Ada), Title: Too Like the Lightning