16. An American Tragedy by Theodore Dreiser 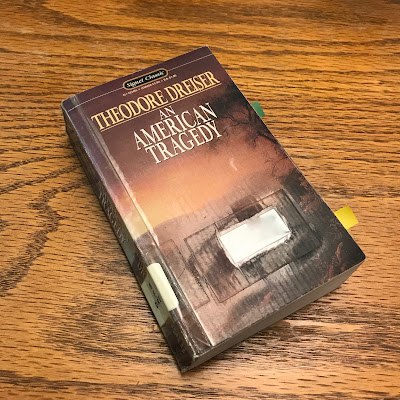 Review:
The first thing that you need to know about An American Tragedy is that it's over 800 pages long. I was looking forward to it. You may or may not recall that I quite enjoyed Theodore Dreiser's previous entry on The List,Sister Carrie, and I was eager for more of his perspective on morality vs the American working class experience.

This book has that, but also it's just way way way too long. The length of a book is seldom the most important thing about it, but in this case it is.

Clyde Griffiths is the main character of this particular American tragedy. The book begins with him still a boy, living with his parents who are poor, nondenominational Christian missionaries of some kind. He and his family are living in Kansas City but tend to move from place to place as their lifestyle necessitates.

For obvious reasons, young Clyde chafes at the missionary/street preacher life and soon leaves the family home to work. Due to his lack of education, the first place he lands is at a semi-fancy hotel, working as a bellboy. This position leads to his first misadventure, when he and some of his bellboy friends take some girls and a car that doesn't belong to them out on a day trip, get drunk, and end up involved in the hit and run death of a little girl.

Fleeing to Chicago and working under a different name, Clyde avoids any prosecution for this crime (which he wasn't really responsible for—he wasn't driving the hit and run vehicle—while not being a completely innocent bystander either). After a few years pass he decides to use his own name again and gets a new hotel job in Chicago. This is where he meets his uncle, Samuel Griffiths. Samuel is the wealthy owner of a collar factory in New York state, and he offers Clyde a position (feeling bad because his brother, Clyde's father, was cut out of inheriting family property).

Clyde takes the job, and moves to Lycurgus, NY, where he finds himself socially isolated due to his status of a relative of one of the town's first families, while simultaneously not being paid very well. He's put in charge of a small department of young female factory workers, and that's where he meets Roberta and becomes obsessed with her. Having been cautioned not to fraternize with any of the employees working under him on pain of job loss, he at first resists making contact with her. Then, they spot each other one weekend at the lake and Clyde takes Roberta and her friend canoeing.

The relationship between Roberta and Clyde is the core of the story and it just begins at the one third mark of the novel, which is usually the only part that I recap. Suffice it to say that the title of this book is An American Tragedy, not An American Happily Ever After, and things do not end well for Roberta and Clyde.

Dreiser excels when it comes to creating characters that you love to hate. Clyde is weak-willed and lustful and selfish, but Dreiser frames him in a neutral way. Everyone in the book is flawed somehow, either greedy or selfish, hypocritical, whatever. They're people, basically. Clyde is easier to sympathize with than my old nemesis Hurstwood from Sister Carrie, but not by much. Just as he did with Hurstwood, Dreiser makes sure you feel both disgust and compassion for Clyde by the end of the book.

But back to the beginning of the review, this book is way too long. If it had been half as many pages as it is, it'd probably be a new favourite. Dreiser cuts right to the heart of several issues that are still relevant 95 years later: reproductive rights, capital punishment, workplace harassment, wealth inequality, justice issues, and I'm sure I could name others. But all of these things are buried in the repetitive and redundant events of the plot. He's also never met a multisyllabic obscure word he didn't like.

I was going to tell you not to bother with this book but then I got to listing all that stuff about the relevant issues it tackles and upgraded it to a "meh." There's important stuff in here but I can't help feeling like someone has probably done a better job with this same story in the intervening years. Hopefully I'll remember to let you know if I ever find that story.

But there was this to be said in connection with the relationship between these two, that no time, owing to the inexperience of Clyde, as well as Roberta, had there been any adequate understanding or use of more than the simplest, and for the most part unsatisfactory, contraceptive devices.