First Sentence: The ship drove toward its hellish perihelion. 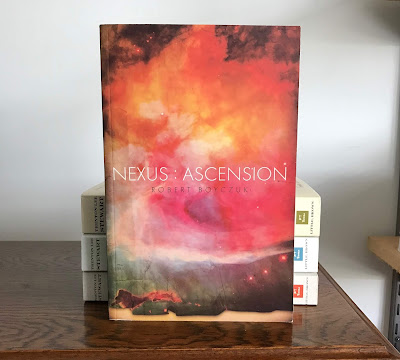 Review:
I didn't really want to write a review of this book, but my desire to finish the Two Hectobooks project sometime before I turn 45 overrode that reluctance. This book just feels truly random in a way that a lot of other books I've reviewed lately haven't, plus there's all sorts of techspeak to introduce.

Anyway, Robert Boyczuk's Nexus: Ascension is the story of the long haul crew of the Ea and their passengers who arrive back at their home planet after 30 years to discover that a plague has wiped out the entire population. The crew consists of Sav and Liis, who have both been working on long haul ships (as in multiple decade-long trips) for a long time. They live mostly a couple of weeks here and there and the rest of the time in stasis. Their passengers are Hebuiza, a Facilitator who has had various technological implants, and Josua, whose role I honestly never understood.

The crew of the Ea don't have enough supplies to stay in orbit forever, so they have to risk going down to the planet's surface. They need to find out what happened and figure out what to do next. Liis has fallen in lust with Josua during the short time they've spent together, but he's more interested in finding out what happened to the lover he left behind in stasis. When they go down to the planet, they discover that the stasis facility she'd been in malfunctioned, and she's no longer alive. This becomes the driving motivation for Josua when Hebuiza figures out that the plague was engineered and planet on the planet by Nexus.

Nexus is basically the ruling force in the galaxy in this book, a bureaucracy that controls the distribution of technology through something called the Ascension program. The planet, Bh'Haret, is a rebel planet, and the crew of the Ea believes that it was punished because of this. Nexus maintains control via people called Speakers, who are able to communicate across many light years instantly via mysterious means.

While the crew of the Ea are trying to decide what to do next, another long haul ship called the Viracosa returns to join them in orbit around Bh'Haret. After that nothing that happens is what you'd expect, but I'm leaving off my plot summary there.

This book was pretty decent. It's tightly plotted and you really need to pay attention to the small details to get the full effect. On the other hand, it can tend to drag in places. There are several scenes throughout the novel where the characters just move through spaces for what seems like an eternity with no real reason for spending so much time on those scenes. On the other hand, Boyczuk pulls off something rare, which is that there's a sense of wrongness to the characters and the world they live in which isn't about the quality of the prose or worldbuilding. It's instead about how alien their far-future world, attitudes, and actions feel. The book takes place over the course of well over a thousand years, and the only person whose mind is blown by that is the reader.

The characters are all interesting, though, I repeat, very alien. The crew of the Viracosa ends up getting pretty short shrift in the narrative unfortunately. I wished that Liis hadn't been mostly sidelined by her really intense crush on Josua, being that she's the only female character present from the beginning of the book (others show up later).

There's good stuff here too about standing up to an enemy that seems completely invincible, although there's also stuff about the folly of revenge. If the whole thing had been just a bit more exciting, I'd have no problem recommending it whole-heartedly. As it is: give it a shot if any of the preceding sounds good.
Posted by M.R. at 5/11/2020 12:00:00 AM