About a year ago when I actually read and reviewed this book, we were not in the middle of a global public health crisis related to a virus. I've been trying to decide how to handle posting this review given what's currently going on, and have concluded that I'm going to issue it with this warning: Earth Abides deals with an apocalyptic scenario in which the majority of the population dies due to an unknown illness. You may not want to read about it at this time, but I will leave that up to you. Trust me, it felt a bit weird just typing up this post. -M.R.

First Sentence: ... and the government of the United States of America is herewith suspended, except in the District of Columbia, as of the emergency. 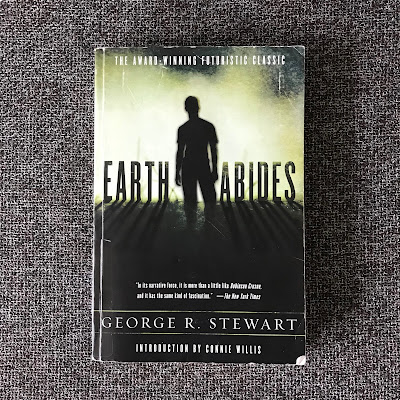 Review:
Earth Abides is an early version of the modern post-apocalypse novel, written and apparently set in 1949, a time around 70 years ago which would likely feel like the post-apocalypse to many young people today accustomed to modern conveniences, social attitudes, and population size. George R. Stewart imagines a world which has been mostly emptied of people, who have all been very orderly about dying in the proper place.

Let's get a bit more detailed, though. Our point of view character is Isherwood "Ish" Williams, lest we forget that people in the past gave their kids dumb names, too. He is a hyper-competent male protagonist in the mode of the late 1940s (see also Walden Two, which the very beginning of this book really reminded me of, in terms of tone if not content). Ish finds an old hammer, gets bitten by a rattlesnake, spends several days tossing in bed with snake venom and some other illness, and emerges to find that while he was away in the mountains, everyone in America besides a small handful of people died of a mysterious illness. Ish calls this the Great Disaster.

Ish is a San Franciscan, and he goes to his parents' home on San Lupo Drive. Of course they are not there, either in corporeal or corpse form. He concludes that he will survive, and here's why he thinks so:

1. Have will to live. Want to see what will happen in world without man, and how. Geographer.
2. Always was solitary. Don't have to talk to other people.
3. Have appendix out.
4. Moderately practical, though not mechanical. Camper.
5. Did not suffer devastating experience of living through it all, seeing family, other people, die. Thus escaped worst of shock.

He decides that, as a student of geography, he will observe and explore the aftermath of the Great Disaster. He gets in a car and drives to and from New York City. When he gets home, he remains lethargic for some time, until by chance he meets Em, the woman who will jolt him into action when there is no longer any notion of civilization left on the planet.

I liked this book even though it's extremely dated in a couple of ways, and also has a few flaws that I had a hard time with. It's almost more interesting to read about an old apocalypse than a new one. These characters have been taken out of a world that is already strange to me, and then dumped into a stranger one. Stewart writes well, although his prose does occasionally take on that Walden Two info dump quality. There are some awkward constructions and descriptive passages but without reading more of his work it's hard to tell whether that's Stewart or just his protagonist, who is such a tool most of the time.

Ish is often insufferable, frankly. He's the smug young white guy who would've become one of today's old white guys if it hadn't been for a plague killing everybody. His age at the beginning of the novel—20—means that he was too young to participate as a soldier in the Second World War, and also makes him about the same age as my grampa (who is no longer with us) would've been in 1949. This personal connection of sorts actually gave me a really good reference point for the book. The other interesting thing is that it allowed me to compare shy, academic Ish with my charismatic, social grandfather, and wonder what he would've been up to in this post-apocalypse. I have no doubt that he would've survived the Great Disaster, anyway.

All that being said, let's go over my three main issues with the book (at least one of which is a bit spoilery).
There are some other things that are dated (e.g. the treatment of women in the book is... interesting) but I try not to get too picky about that sort of thing in old books, drawing the line between "hard to read" like the first two points above and "kinda what I expected."

I liked this book because I'm obviously the kind of person who is interested in where things came from, possibly moreso than where they're going, when it comes to art at least. It's interesting to read Earth Abides and see the things I've mentioned, as well as finding the seeds of everything from The Stand to The Walking Dead. If you're someone who prefers to see what the present has to say about a genre, I think that you can safely skip this.

But centuries flowed by and then more of them, and many things changed. Man invented civilization, and was inordinately proud of it. But in no way did civilization change life more than by sharpening the line between work and play and at last that division came to be more important than the old one between sleeping and waking. Sleep came to be thought a kind of relaxation, and "sleeping on the job" a heinous sin. The turning out of the light and the ringing of the alarm clock were not so much the symbols of man's dual life as were the punching of the time clock and the blowing of the whistle. Men marched on picket lines and threw bricks and exploded dynamite to shift an hour from one classification to the other, and other men fought equally hard to prevent them. And always work became more laborious and odious, and play grew more artificial and febrile.