R79. The Long Way to a Small, Angry Planet by Becky Chambers

First Sentence: As she woke up in the pod, she remembered three things. 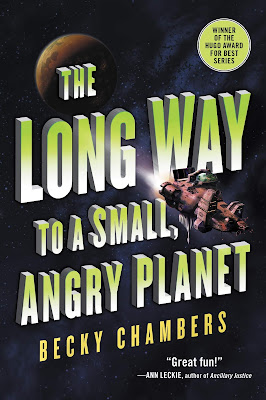 Review:
I probably shouldn't even review The Long Way to a Small, Angry Planet because I read the series out of order, meaning I've experienced this book rather differently than the author, Becky Chambers, intended. Therefore, a disclaimer: I have some gripes that maybe I wouldn't've had otherwise.

As for why I read the series out of order: my book club read the second book, and I liked it enough to read the first one. And then the third.

This book is about the crew of a space ship that builds paths in space between locations, so that other ships can take shortcuts. They're hired to take a long trip to the centre of the galaxy to make a path from the centre to the more populated areas. This all takes place in a distant future in which Earth is being rebuilt after an ecological disaster that led to Humans fleeing in generation ships (the Exodan Fleet) and then eventually being welcome into a United Federation of Planets type arrangement called the GC. If this sounds a bit like Star Trek it's because it is a bit like Star Trek.

Anyway, that's the premise. The plot isn't much more complicated, but the book is really more concerned with its characters than its story. This is simultaneously a strength and a weakness. A strength, because it gives the reader a real sense of this universe and the way it is populated by people of many species, with different cultures, political opinions, lifestyles, etc. It feels very grounded, despite being set in space (hur hur).

The problem is that there are a few too many of these characters and furthermore I didn't like all of them. Rosemary, classic fish out of water sf character, is our point of view character and audience surrogate. She's fine, and so are most of the others. Kizzy, one of the two ship techs, majorly got on my nerves (mainly because I think we're supposed to find her charming and I really didn't). Jenks, the comp tech, is not really well-developed other than being a little person who is in love with the ship's AI, and Corbin, algae grower (or whatever his title is) is pretty thinly sketched, too. On the other hand, some of these character issues are obviously more me issues than actual issues with the book as written.

This book is basically Star Trek TNG but more modern, less afraid of LGBTQ content, and even more warm and fuzzy. It's about people caring for each other and coming together despite differences. They are all amazingly reasonable. In fact it's really just a story about a nice ordinary group of people living and loving all over the galaxy, working hard, being good at their jobs, and so on. There's nothing inherently wrong with this. It's a nice change for a genre that can be excessively doom-and-gloom lately. But I am glad that not every book is like this.