First Sentence: The summer heat was sucking the life from Develish. 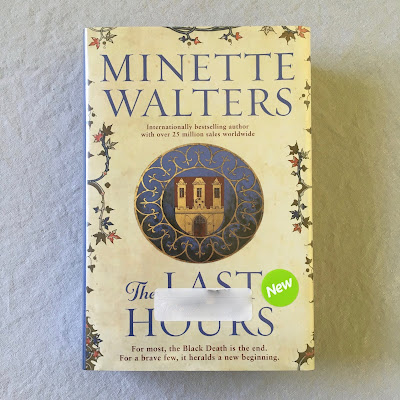 Review:
I've never actually heard about Minette Walters before, but you don't have to dig very deep into the information for this book to discover that her wheelhouse prior to writing The Last Hours was the psychological thriller genre. While the Black Death setting (i.e. 1348 in England) was all I really needed to know to pique my interest, finding out about the author's previous work made me even more keen to try out this novel.

Unfortunately, Walters dropped the ball on this big time. Beyond just the setting, the book is specifically about Lady Anne of Develish, who is somehow far ahead of her time in her views on medicine, sanitation, class, education, and the Church. When Lady Anne hears about the plague, she immediately quarantines herself, her daughter, and all of her serfs within her husband's demesne. As time wears on with no way of receiving accurate information from the outside world, she, her right hand man Thaddeus (handsome and brilliant bastard), and her other leading serfs need to maintain control and keep everyone safe, busy, and fed.

That's all well and good, except that the characters in this book are underdeveloped in the extreme, especially Lady Anne. It is a huge problem when the character who is driving the entire plot is roughly six centuries ahead of her time and the only reason given seems to be that she was raised in a convent. I really am willing to allow for characters who are anachronistic if those characters are well-developed, but Anne simply isn't. This throws the whole rest of the novel into jeopardy because it made it difficult to suspend my disbelief. Anne's daughter Eleanor is a very distinct character who, dare I say, may turn out to be very memorable. She is extremely hard to pin down: a teenager, extremely petulant, extremely confused, neglected by her mother. This is dealt with sort of late in the novel, but I had a hard time dealing with the worship of Lady Anne in light of the way she treats her own daughter.

The other major issue is that the book is incomplete. Though it exceeds 500 pages (too many of which are about Thaddeus and a handful of serf boys wandering around the post-apocalyptic landscape of the plague-ridden countryside), the end of the book is just where the author chopped it off to lead in to the next book in the series? trilogy? duology? I don't read tons of series these days, mind you, but typically a book should resolve at least a few of its main plot points even if the story is going to continue in future installments. The ending of The Last Hours doesn't answer much of anything other than the question of whether Thaddeus and his band of boys could make it back safely.

I don't even know if I could say there are interesting themes in this book. No one seems to learn much of anything. At the beginning, everyone is already totally convinced about Lady Anne's strange practices. I guess there's a fair amount in it about needing to stick together in the face of adversity (but that's never really at risk either) and the necessity of questioning authority and power.