Year Published: 1924
Pages: 306
First Sentence: Except for the Marabar Caves—and they are twenty miles off—the city of Chandrapore presents nothing extraordinary.
Rating: 3/3 (read it!) 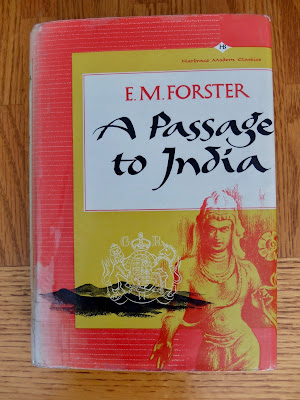 Review:
My biggest problem with A Passage to India was that it prevented me from starting reading Pale Fire. Let me explain.

I had every intention of not straying too far from the reverse order of The List, with the exception of things like the D. H. Lawrence novels in the middle, and stuff that I'd already read. However, it's not like I could just not read this when someone in my book club selected it. I decided that I'd review it after my initial reading, and then just delay posting the review for as long as possible. You're seeing it now, at its correct position in the list, because I successfully staved off the need to post the review until the correct time. Also, M.R. from the past is really excited to start reading Pale Fire after writing this review. Let's hope the future doesn't prove her wrong.

A Passage to India is an excellent passage between the India on display in Kim and the one in Midnight's Children. Set in Forster's present-day India of the 1920s, the story is about a young Englishwoman named Adela Quested, eager to see "the real India," who goes on an excursion to some caves outside a city in the company of her fiancé's mother, Mrs. Moore, an Indian doctor, Aziz, and eventually a professor-type, named Fielding. Very little of anything happens prior to the trip to the caves, but something very serious happens during the trip, which falls at almost exactly the halfway point of the novel, and sets the whole thing in a completely different direction. I can't really get more detailed than that without giving everything away, I'm afraid.

So allow me to gush a bit instead.

I went back to my review of A Room with a View, E. M. Forster's other List book that I've read so far*, before writing this review. I was shocked to discover that I considered giving that book a 2/3 rating at the time, because it's one of my most fondly remembered books of the project so far, and the only reason I had much enthusiasm for starting the present book.

Forster's handling of this story is masterful. The subject matter feels as anachronistic as in the simpler love story I read earlier, with the same glorious, critical eye. The transition at the centre of the book is from comedy of manners to commentary on imperialism, which is as shocking as the transitions between characters' points of view are smooth. The whole thing is just so insightful and organic, with the touch of wryness that I've delighted in before. My copy of the book came with a very helpful glossary and a somewhat less helpful set of notes to clarify certain points of culture that were referenced, which I appreciated.

There's a lot to meditate on with each of the characters. Although I started with Miss Quested in my list above, Aziz is the closest thing to a main character in the book, and brings things to a close. He's fine but flawed, and the way he and Fielding especially relate to one another is really interesting and true to life. They become friends with one another despite both having qualms about certain aspects of the other's character.

While this book isn't exactly action-packed or exciting (a statement I make mostly because that's how our book club books tend to be, and that's how I've come across it so early), it's an enlightening look at the latter days of the British Raj in India that almost preternaturally anticipates its destruction, and doesn't make any bones about being critical. Read it if you're fascinated by but will probably never get to actually visit India. Read Kim and Midnight's Children in that case too.

* Note from the present: of course I've also since read Howards End and loved that, too.

But she did not take the disappointment as seriously as Miss Quested, for the reason that she was forty years older, and had learned that life never gives us what we want at the moment that we consider appropriate. Adventures do occur, but not punctually.

Of the company, only Hamidullah had any comprehension of poetry. The minds of the others were inferior and rough. Yet they listened with pleasure, because literature had not been divorced from their civilization. The police inspector, for instance, did not feel that Aziz had degraded himself by reciting, nor break into the cheery guffaw with which an Englishman averts the infection of beauty. He just sat with his mind empty, and when his thoughts, which were mainly ignoble, flowed back into it they had a pleasant freshness. The poem had done no 'good' to anyone, but it was a passing reminder, a breath from the divine lips of beauty, a nightingale between two worlds of dust. Less explicit than the call to Krishna, it voiced our loneliness nevertheless, our isolation, our need for the Friend who never comes yet is not entirely disproved.

The others, less responsible, could behave naturally. They started speaking of 'women and chilren'—that phrase that exempts the male from sanity when it has been repeated a few times. Each felt that all he loved best in the world was at stake, demanded revenge, and was filled with a not unpleasing glow, in which the chilly and half-known features of Miss Quested vanished, and were replaced by all that is sweetest and warmest in the private life.