First Sentence: The unicorn lived in a lilac wood, and she lived all alone. 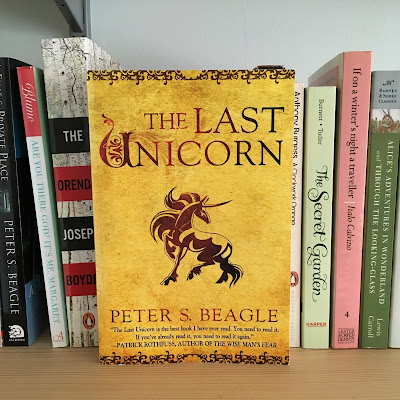 The Last Unicorn was published in 1968, and fourteen years later, in 1982, an animated version of the story was released. This is, in my opinion, one of the most faithful adaptations ever made. Until my book club read this book, I thought literally every woman on the planet aged 35 and under had seen and been influenced by this adaptation as much as I have, but I was mistaken! So, I won't take it as a given that everyone knows what this book is about.

Aside from the title, that is. This is indeed the story of the last unicorn, who discovers that she's the last one day when two hunters enter her forest. She quickly decides that she's going to look for the others and embarks on a search. Out in the world, people do not recognize her as a unicorn, thinking instead that she's a white mare.

The only person who recognizes the unicorn for what she is is Mommy Fortuna, an evil carnival grifter of sorts who tours the countryside with a menagerie of pathetic animals who are dressed up to look mythical by magic. Except one: Mommy Fortuna has managed to capture a real harpy. Soon enough, that one exception becomes two, as Mommy Fortuna captures the unicorn as well.

There is a magician, Schmendrick, who works for Mommy Fortuna but not with her, and he also recognizes the unicorn. Soon after her capture, as the harpy tries to escape, Schmendrick helps the unicorn to get away and the two of them return to her search.

The search is a very long process, and they encounter a few different people along the way, none of whom recognize the unicorn, until Schmendrick is, shall we say, apprehended by Captain Cully, a highwayman type who fancies himself to be more of a Robin Hood type. It's in Cully's presence that Schmendrick actually manages to work some magic for once, and when the unicorn rejoins him, they're spotted by Molly Grue, who does the cooking but doesn't have much affection left for Cully. She recognizes the unicorn for what she is as well, and the duo becomes a trio.

This all takes up the first third of the book, and I generally don't write my summaries for anything beyond that except for romnovs, but in this case, I'll mention that there are hints that the three adventurers are following to a King named Haggard and a creature called the Red Bull, who have something to do with the disappearance of the unicorns.

So, Peter S. Beagle has produced such an amazing book that I can get my lone issue with it out of the way right off the bat: the style, which is I think deliberately a bit dreamy and distant, could occasionally be a bit alienating as a result. Usually I was fully engaged in this book, but then every now and then, it would just sort of kick me out.

That's so minor though. Let's get back to that adaptation I mentioned for a moment. I watched it probably a hundred times as a little girl. It's one of those things that I'm sure has contributed to my current taste and sense of aesthetics and God knows what else. It's beautiful and dark and a bit scary, and so is this book. I think many people don't realize that the movie is based on a book. I certainly didn't, until I or my sister stumbled upon it at the library fifteen or more years ago. This was the second time I've read the book.

The movie is a more straightforward fairy tale. Like I said, it's very faithfully adapted, however, the book has much more complex themes and ideas that are close to the surface. It's extremely concerned with identity and perception, and of course with the interactions between those two things. The unicorn is portrayed very much as something other, whose concern for the other unicorns is almost completely incidental, and whose connection with Molly and Schmendrick is likewise. Which is more real, the immortal, mythical unicorn who will witness the passage of time but won't give it any notice, or the human characters who will experience sorrow, joy, and death? Or, as the setting reminds us, with its deliberate anachronisms and poorly defined borders, are they all unreal? Are you a unicorn if nobody can see that you're a unicorn? Should you call yourself a magician if you can't do magic? Will the beautiful girl love you if you write poetry for her, or would it work better to be the best hero you can be, and slay the most dragons?

The book poses so many questions and doesn't offer answers, leaving that up to the reader. So you should obviously read it as soon as you can.

"I'd quit show business first," she snarled. "Trudging through eternity, hauling my homemade horrors—do you think that was my dream when I was young and evil?"

"The eyes are perjurers, right enough," grunted the second man, who seemed to be wearing a swamp. "But do you truly trust the testimony of your ears, of your nose, of the root of your tongue? Not I, my friend. The universe lies to our senses, and they lie to us, and how can we ourselves be anything but liars? For myself, I trust neither message nor messenger; neither what I am told, nor what I see. There may be truth somewhere, but it never gets down to me."

"Of course I know," answered the cat, with a glinting, curling yawn. "Of course it would be simpler for me to show you. Save a lot of time and trouble."