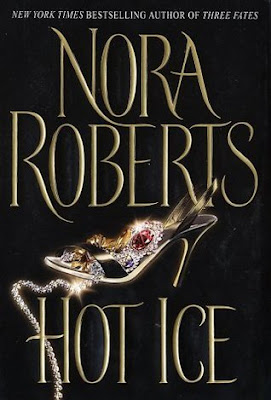 Review:
Well, over eight years and 71 books in to the erstwhile Romance half of the Two Hectobooks project, I've finally read a Nora Roberts novel.

Written, published, and set in the late 80s, when Roberts was only a few years into her career and had only published about forty books, Hot Ice begins with jewel thief Doug Lord (one of the least inspired names I've come across—"Doug" is such an unsexy name) fleeing hitmen through the streets of New York. He hops into Whitney MacAllister's car and. Whitney is on her way home after spending some time in Paris to celebrate breaking up with Tad Carlyse IV. To Doug's surprise, Whitney doesn't just scream and get out of the car, she becomes his getaway driver. Whitney has basically grown up in the lap of luxury—her father owns an enormous ice cream empire, and somehow at 27 she's built an interior design business in which she works almost never.

Whitney's looking for a romp and Doug is hot so the two of them team up. Doug is on the run from a crime boss named Dimitri because Doug has stolen papers that lead to the way to a treasure in Madagascar that's been hidden there since the French Revolution. Whitney and Doug catch a plane to Madagascar, via Washington, DC and Paris, France. Just to emphasize that this was a different time, they're able to smoke on the plane. Dimitri's goons are hot on their trail the whole way.

Thanks to the fact that they're being hunted, Doug and Whitney have to basically hike overland across Madagascar from the capital city Antananarivo to Antsiranana on the northern tip, a city of 50,000 people which was formerly known as Diego Suarez (and referred to as such in the book). Soon after arriving, they find the treasure, a chest full of jewels buried beside a man who fled France during the Revolution but remained loyal to Marie Antoinette.

It's at this point that three things happen:
Whitney demonstrates just how ballsy she is by telling Dimitri that she murdered Doug, buying time to keep herself alive. Doug arrives to save her, and then Dimitri reveals he's way ahead of the two of them. Dimitri, by the way, is portrayed as effeminate. He was abused by his mother, who apparently had her wires crossed when it came to religion and poetry.

Just as Whitney and Doug are about to meet their maker, the Malagasy police burst in to arrest Dimitri, followed closely by a private detective and Whitney's dad, of all people. Everyone kind of chuckles about the life or death shenanigans and then returns to the hotel.

Doug ditches Whitney before she wakes up the next morning.

No, never mind, he shows up back at her apartment in New York a few months later to propose to her. He'll hang up his thief shoes and start a restaurant.

And then, as far as the book is concerned, they live happily ever after but I'm pretty sure that this relationship ends in divorce.

First I'm going to tell you what I didn't like, so we can end this on a positive note.

Things dragged a bit in the middle of the book. I knew that there would be a point where the two lovers would be captured and/or separated, and I got a bit bored waiting for that time to come. There was some awkward sexual stuff that reads a lot differently in the #metoo era than I guess it did in the late 80s. (Although of course it's nowhere close to The Sheik levels of upsetting.) There was some awkward racial stuff, too: use of the word "Oriental" when referring to one or more Asian people and a rosy portrayal of various Malagasy people as noble, salt of the earth caricatures. (Again, nothing as offensive as The Sheik!) Some things were dumb but I was willing to overlook them because they were fun. Other things, like a reference to a Bible being open to the "Book of David" and Marie Antoinette being portrayed exclusively as a victim rather than ... a morally ambiguous but important historical figure, were more irritating.

Worst of all was Doug. I think my hatred of him speaks well of Nora Roberts' skill at characterization. Both of the leads in the novel have well-realized personalities. Here's everything I hated about Doug:
Let's start my positive comments with Whitney, though, because I loved her as much as I hated Doug. She is shockingly sassy. She is extremely frivolous and brash. She is rich enough to afford to be all of these things and damn the consequences. She's kind to wait staff (ha!).

I haven't gotten a lot into this, but the novel, and Doug in particular, are obsessed with class, both in the sense of who is "classy" and also high class and low class in terms of wealth—rich heiress Whitney vs Malagasy farmers for example. It's pretty intriguing and also bizarre.

I've been going on for a long time, so let's wrap this up.

Nora Roberts is so good that this novel feels like something she just exhaled onto the page. The romantic and sexual energy between the two leads is real, the story hits every single beat it needs to, and the whole journey is a ton of fun even if it's ultimately just fluff. I don't ever plan to read another one of her* books, but I'm so glad I did read at least one.

* I do plan to read at least one JD Robb book. I'm aware that they're the same person but I'd say she's using the pseudonym for a reason and her romance novels should be considered separately from however you'd classify the In Death series.