First Sentence: He clenches the orange plastic pony in the pocket of his sports coat. 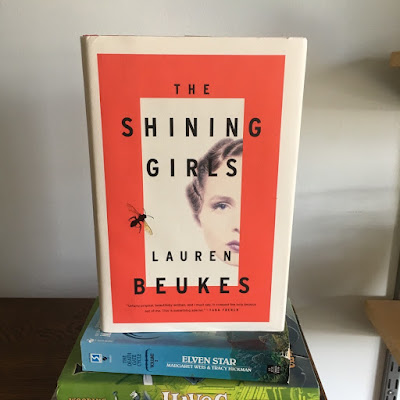 Review:
The Shining Girls is a novel about a time travelling serial killer. If you're anything like me, I suspect that that's all you need to know in order to decide whether you're interested in this book or not. The killer's name is Harper Curtis. He is a man who, in Chicago of the early 1930s, finds a house that is more of a House, which has the ability to transport him through time, between 1929 and 1993. In an upstairs room, he finds a collection of objects that speak very loudly to him, and a collection of names that belong to his "shining girls." These are the women he will murder over the course of the novel. One of them is Kirby Mazrachi, and she is Harper's mistake: he leaves her dying, but not dead. Kirby is a young woman whose mother is a bit unhinged, and is victimized while out for a walk with her dog.

So this is a cat and mouse game across time, and I enjoyed it quite a bit. Although the premise hooked me immediately, I knew early on that the overall effect of the book would hinge very heavily on how it ended. Unfortunately, the ending comes rather abruptly and Lauren Beukes doesn't quite stick it. Her writing style is more about feeling and atmosphere than detailed description, which I'm sort of neutral on. I would've loved more flavour of each different time period, although I see why details are sparse: Harper visits only for the purpose of killing, and his victims don't get much time devoted to them.

Beukes doesn't shy away from the brutality of the attacks, and it can be very upsetting as well as effective. It's clear immediately that Harper Curtis is disgusting and brutal, and that these murders are not romantic except that he perceives them this way. I don't read a lot of crime fiction (although I watch quite a few murder shows) and the murder scenes in this novel are shocking without being gratuitous. It's especially chilling to read about how quickly a murder can happen, when I feel like so much of being a woman (and maybe just being a person in the 21st century media landscape) is about planning how you would evade a hypothetical attacker.

On the subject of the victims in this book, a bit of an aside. The women whose lives are taken are diverse in terms of their race, sexuality, and socioeconomic status. What links them is that they "shine," which can be broadly interpreted to mean that they are brave and special in the way they've chosen to live their lives. Even though she doesn't spend a ton of time with the victims other than Kirby, Beukes does a really good job of sketching out who these women are, what they're offering to their communities, and I felt a genuine sense of loss at their deaths.

Anyway, this is a rare book that I think could have put an extra 100 pages to good use. The ending then might not have been so abrupt and we could have had more time spent with the victims. The other thing is that I think that this book is touching on ideas about mortality and death as the great leveller except that it doesn't go as far down that path as it might. Still worth a read.
Posted by M.R. at 6/03/2019 12:00:00 AM