R63. Murder on the Orient Express by Agatha Christie

First Sentence: It was five o'clock on a winter's morning in Syria. 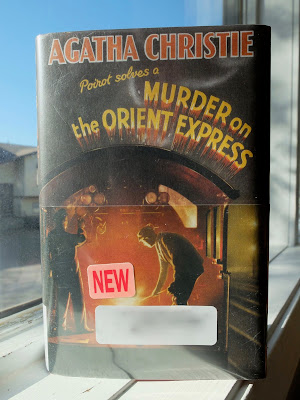 Believe it or not, I'd never read an Agatha Christie novel before Murder on the Orient Express. As I mentioned in my review of The Maltese Falcon, my grasp of the mystery/detective genre is feeble at best.

And yet, Hercule Poirot is a familiar name. By my count this is Christie's eighth novel featuring this oddball Belgian detective. He has a voluminous moustache and an egg-shaped head, and I am in love with him. This book is a sort of locked room mystery, in which Hercule Poirot finds himself among several passengers in the same carriage of a train that gets waylaid by a mountain snowstorm, and oh by the way one of their number has been murdered.

In the early going I found Christie's style to be a bit too flat, but then as soon as Poirot began his investigation I got caught up with wanting to know the solution. The book is a wonderful puzzle that gives the impression that if the reader were only as smart as Hercule Poirot, they could solve the mystery along with him.

And that flat style I mentioned belies Christie's skill in sketching out her characters and the atmosphere of the train. The cast involved in this book is frankly enormous considering the length of the novel, but every character is easily distinguishable from the others. Given that the cast is multinational, they also all have very interesting and dare-I-say accurate prejudices about each other, which Christie seems to employ for purposes of humour (I found it humorous, anyway, although it struck close to the bone given recent world events). And regarding the atmosphere: my kingdom for a time machine that would let me take a trip on a train like this in the 1930s. (My kingdom for a time machine, always, but some locales just seem like more fun than others.)

I wish I could come up with more to say about this book. Basically it's a terrific mystery story (I didn't see the ending coming at all). It doesn't necessarily have anything earth-shattering to say about the human condition or anything, but it's fun and diverting. This may have been my first Agatha Christie novel, but I hope that it will be the first of many.
Posted by M.R. at 11/10/2018 12:00:00 AM