Year Published: 1970
Pages: 284
First Sentence: It unrolled slowly, forced to show its colors, curling and snapping back whenever one of us turned loose.
Rating: 3/3 (read it!) 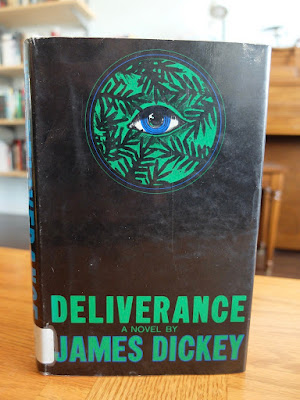 The funny thing is, though, I've never actually seen Deliverance. I had no idea that young John Voight was that adorable. I have seen the infamous rape scene, and not on purpose, just via an unfortunate channel-surfing incident. So I went into this book knowing about a banjo-playing kid and a guy getting raped, but I had no idea how it'd all end.

So if you've been living under a rock since 1972 or that rape scene isn't actually as infamous as I thought, here's what Deliverance is about. Four men from Atlanta (I actually don't think the city is named, but it's somewhere in Georgia so I drew my own conclusions) go on a weekend canoe trip down the Cahulawassee River, which is about to be dammed and turned into a lake. The region is basically inaccessible except via the river. Lewis, the ringleader/instigator, is a survivalist fitness maniac. Our narrator is a man named Ed Gentry, who is a partner in a graphic art firm and has a beautiful wife. These two are the closest friends in the group, which is rounded out by Drew, the musician, and Bobby, the fat one. (These guys are actually more well-described in the novel, I promise, I just can't really remember what Bobby does.) The group is hilariously unprepared, and after one afternoon communing with nature, the next day sees their two canoes being separated, and things go from peaceful river cruise to nightmare hellscape in short order when Ed and Bobby meet up with a pair of locals.

The first third of the book is actually just the build up to the trip and then the first day, so I'll end my summary there (although I suppose I should mention that the banjo scene and rape scene are both present in the original text, in case you were wondering). The whole thing is structured such that there's a "Before" chapter, each day of the trip is its own chapter, and then there's an "After" chapter. I was pretty sure that Ed would make it, given that he's a first person narrator and they only die in the most irritating novels, but I wasn't sure about any of the others.

What I'm saying is that this is a pretty tense and absorbing book for something that's become cultural shorthand. I have to admit that my hopes were for a bit more disaster than I got. The whole trip was so ill-conceived that one suspects these four men would've met disaster even if they hadn't met some very hostile locals. The naivety and hubris on display are colossal, which is kind of the whole point, and I liked that, but I feel like Dickey could've taken things in a direction that would've been more satisfying to me personally (ha!).

I'm probably sounding like a broken record at this point, but as usual I did very little background reading on this book. However, the back flap of the edition I read had a fairly thorough author bio that cast a different light on some things.

First of all, James Dickey was a poet laureate, of all insane and unlikely things. Deliverance was his first of only a few published novels. In retrospect, the poet thing should've been obvious. The language in Deliverance isn't the kind of flowery nonsense that makes me roll my eyes, but it's very clear that the words are all chosen with extreme intent.

Second, the book has a lot to say about masculinity and some of it definitely went over my head, but given that Dickey's author photo on the back cover makes him look like someone's dad who is an accountant, I found myself curious about him (I don't think I believe in the death of the author). Turns out that not only was he a poet laureate, Dickey was a WWII and Korean war pilot, an ad executive, and also "an avid woodsman, archer, and guitarist," i.e. all things that come up in this novel. I would imagine that a manly-man who became a full-time poet at the age of 38 would have a lot of thoughts and feelings about masculinity. So that's cool.

In any case, I'd hoped to be blown away by this novel and that didn't quite happen. On the other hand, the prose is great, the whole thing flies by at a pace I seldom see from List books, and I suspect that there are rewards here for just about any reader at all. Ed Gentry's encounter with an owl in the early going is one of the most haunting things I've ever read.

Not recommended for reading immediately prior to or during a wilderness excursion or hunting trip of any kind.

The change was not gradual; you could have stopped the car and got out at the exact point where suburbia ended and the redneck South began. I would like to have done that, to see what the sense of it would be. There was a motel, then a weed field, and then on both sides Clabber Girl came out of hiding, leaping onto the sides of barns, 666 and Black Draught began to swirl, and Jesus began to save. We hummed along, borne with the inverted canoe on a long tide of patent medicines and religious billboards. From such a trip you would think that the South did nothing but dose itself and sing gospel songs; you would think that the bowels of the southerner were forever clamped shut; that he could not open and let natural process flow through him, but needed one purgative after another in order to make it to church.

"I just believe," he said, "that the whole thing is going to be reduced to the human body, once and for all. I want to be ready."
"What whole thing?"
"The human race thing. I think the machines are going to fail, the political systems are going to fail, and a few men are going to take to the hills and start over."
I looked at him. He lived in the suburbs, like the rest of us. He had money, a good-looking wife and three children. I could not really believe that he came in from placating his tenants every evening and gave himself solemnly to the business of survival, insofar as it involved his body. What kind of fantasy led to this? I asked myself. Did he have long dreams of atomic holocaust in which he had to raise himself and his family out of the debris of less strong folk and head toward the same blue hills we were approaching?