43. A Dance to the Music of Time: A Question of Upbringing by Anthony Powell

Year Published: 1951
Pages: 230
First Sentence: The men at work at the corner of the street had made a kind of camp for themselves, where, marked out by tripods hung with red hurricane-lamps, an abyss in the road led down to a network of subterranean drain-pipes.
Rating: 3/3 (read it!) 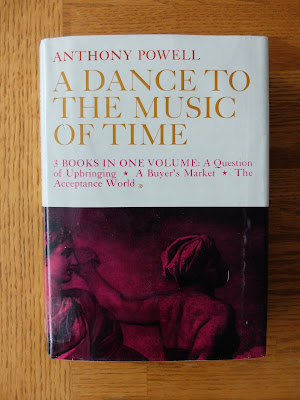 An aside before I begin the review proper: As soon as I figured out that Anthony Powell's A Dance to the Music of Time (ADttMoT from now on) is a twelve book long series, I began to dread it. After deciding how I would handle The List's cheats when I first started reading The Alexandria Quartet (i.e. I must read the first book, but can stop at any point after that), there was still the question of how to deal with actually sitting down and reading twelve books, in the event that I ended up enjoying ADttMoT, a decision which has become relevant now that I've finally read A Question of Upbringing and found it thoroughly readable and at least moderately intriguing. So: while I'll try to keep the actual reviews of the novels all bundled together consecutively, I myself will be alternating ADttMoT books with Random/Romance books, and the Top 100 books that come after this series. As far as I know, I've never really "binge read" a series in my life, and I don't plan to start now. I'm also going to dispense with all worries about spoilers, because if I don't, it will probably prove impossible to review later books.

Which brings me to A Question of Upbringing.

Nicholas Jenkins is a teenager at the beginning of the book, at English public school with his friends Peter Templer and Charles Stringham, as well as a slightly older boy named "Widmerpool" (his first name is apparently Kenneth, but all of their first names aren't much in evidence throughout the book). The time is immediately post the Great War, something that the boys haven't participated in, but feel the effects of in their elders. Over the course of the novel, which isn't particularly plotty, various hijinks occur between the four of them. There are large gaps between the various incidents, so that by the end of the novel, Widmerpool has been in London training as a solicitor since leaving public school, Templer also did not attend university and is instead doing something or other in London, Stringham was lured away from university by a character called Sillery, and Jenkins finds that he has grown out of the public school period of his life and entered into adulthood. This occurs as a result of a kind of break up between him and Stringham.

I'm not sure if it's just that I know that there's so much more coming after this, or if it's just the way that Powell has littered clues throughout the narrative, but there's a sense of this book being the tip of a vast iceberg, and that's honestly the main reason I can't wait to read more of it (at one point, Jenkins mentions upon parting from another character that "he ... passed out of my life for some twenty years" and all I could think about was how if I keep reading the series, I'll eventually find him coming back). I have some suspicion that I'll eventually get bored of the rich white man problems that will inevitably be on display, but for now there's a lot of intriguing potential.

Powell definitely doesn't take you by the hand and show you everything that you need to be paying attention to. I've done my best to avoid any literary criticism of this series, but apparently the four boys are meant to represent four different archetypes. What they may be is definitely not obvious to me. Jenkins is the least active character in that he tends to observe rather than to initiate any of the incidents that occur in the book. Widmerpool is an odd duck, and driven. Templer seems to lean towards criminality and against the establishment, whereas Stringham is well-entrenched in the old societal connections still at work, but waining, in the UK at that time. Am I right about any of this? I have no idea.

A quote on the dust jacket flap of the edition of this book that I read compares Powell's comic writing to the more overstated Evelyn Waugh (read Scoop). Although I probably never would've drawn the comparison myself, I think it's fairly apt. My rating feels a bit high at this early juncture, but hopefully as the series goes on, I'll develop stronger feelings about it.

For some reason, the sight of snow descending on fire always makes me think of the ancient world—legionaries in sheepskin warming themselves at a brazier: mountain altars where offerings glow between wintry pillars; centaurs with torches cantering beside a frozen sea—scattered, unco-ordinated shapes from a fabulous past, infinitely removed from life; and yet bringing with them memories of things real and imagined.

The evening was decidedly cool, and rain was half-heartedly falling. I knew now that this parting was one of those final things that happen, recurrently, as time passes: until at last they may be recognised fairly easily as the close of a period. This was the last I should see of Stringham for a long time. The path had suddenly forked. With regret, I accepted the inevitability of circumstance. Human relationships flourish and decary, quickly and silently, so that those concerned scarcely know how brittle, or how inflexible, the ties that bind them have become.

Feeling that the conversation had taken a turn that delivered me over to a kind of cross-examination, I admitted that I liked reading.
'You can't earn your living by reading,' said Widmerpool severely.
'I never said you could.'
'It doesn't do to read too much,' Widmerpool said. 'You get to look at life with a false perspective. By all means have some familiarity with the standard authors. I should never raise any objection to that. But it is no good clogging your mind with a lot of trash from modern novels.'