CANADA150: Her Daughter the Engineer by Richard I. Bourgeois-Doyle

Way way back when I started the Two Hectobooks project in February 2010 (before that, actually!), my gimmick was that I am an engineer who reads. I still read, and I still have an engineering degree, but ever since March of last year, I haven't been working as an engineer, and I've been doing some soul-searching about my place and participation in the profession.

Elsie Gregory MacGill is someone who appears to have never needed to do any soul-searching about the same subject. Canada's first female electrical engineering graduate, and possibly the first female aeronautical engineer in the world, she had technical prowess and self-assurance I can only dream of.

I think it says a little bit about the state of engineering education in Canada (or perhaps just at my alma mater) that I never heard of Elsie MacGill until I was looking up Canadian women who might potentially replace John A(sshole) MacDonald on the $10 bill. 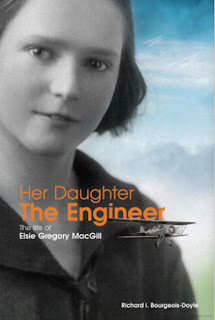 Born in Vancouver, BC, in 1905, Elsie was the daughter of Helen Gregory MacGill, an early advocate for women's suffrage and one of the first women to hold the title of "judge" in Canada. She also had a lawyer father (James Henry MacGill) who seems to have been a bit overwhelmed by his wife.

Elsie obtained her bachelor's degree in electrical engineering from the University of Toronto in 1927, then her master's degree in aeronautical engineering from the University of Michigan in 1929. Struck down by polio or a similar illness just after completing her master's coursework, she took over a year off to recuperate back in Vancouver. For the rest of her life, she walked using canes and occasionally used a wheelchair. The illness was probably a contributing factor in her ability to have a long and successful career: she didn't marry until her late thirties. Between 1932 and 1934 she did doctoral studies at MIT but left to practise her profession at various airplane manufacturers in Canada. She was perfectly placed to participate in the war effort when the Second World War necessitated huge numbers of planes in a short time, and became known briefly as the "Queen of the Hurricanes" for her work on said aircraft at Canadian Car and Foundry (CanCar).

Elsie and Bill Soulsby, who would soon be her husband, were unceremoniously fired from CanCar during the troubled production of the Helldiver aircraft for the US Navy. This began an even more fascinating period of her life where she started a consulting business and then discovered feminism and became a women's advocate. Bill had two children from his previous marriage, but Elsie and Bill never had children of their own.

Although her mother was a noted feminist, Elsie herself seems to have been blind to the struggle for women's rights for most of her career. Whether this was willful or not isn't clear. But after writing a biography called My Mother, the Judge in 1955, Elsie took up her mother's cause. She was named to the Royal Commission on the Status of Women in Canada in Canada's centennial year. The Commission's report was tabled in Parliament three years later, with a "Separate Statement" from Elsie, advocating for the decriminalization of abortion (this did not actually happen until 1988) and against marriage unit income taxation. There is a link to view the full report here.

She continued this work and received various honours for her engineering career until her death while visiting family in Cambridge, Massachusetts, in 1980.

This biography wasn't particularly scintillating, but it's a thorough portrait of a remarkable woman who I wish I'd learned about sooner. I can only imagine the technical skills she would have had in order to successfully practise engineering when she did, and I can't imagine what kind of nerves she must have had.

Next up: This is it for this year, mes amis! I'm hoping to make time to write a reflection post next month.