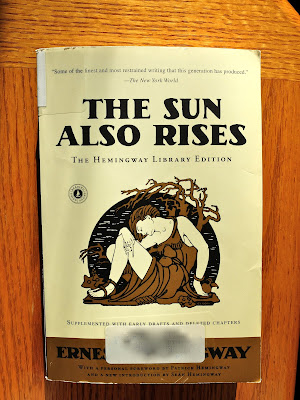 Jake Barnes is a wounded man. He's doing his best not to let anyone see the torch he carries for Lady Brett Ashley, but also he sustained some sort of injury during the War that has left him lacking an important part of himself. It's not clear what the extent of this injury is, only that it seems to have left Jake impotent. That by itself is a personal tragedy on a scale I find hard to contemplate, and I am not being sarcastic.

Brett is easier to be sarcastic about. She's a modern woman. She's in the process of getting a divorce in order to marry a man named Michael, and meanwhile she's running around and having sex with different men. She likes to cuddle with Jake.

Jake and Brett are two of several characters who aimlessly travel from Paris to Pamplona for the running of the bulls before that became a tourist cliche, and moreso to watch the bullfights (fortunately for me, it's way less traumatizing to read about a bullfight than it is to watch one). They drink an astounding amount of alcohol over the course of their fiesta, to the point I am amazed that none of them were dead at the end of it. This is an instance where the plot is much less important than the execution.

I've ragged on Ernest Hemingway's style in the past, but I can't figure out how to articulate how perfectly he deployed the English language in The Sun Also Rises. A Farewell to Arms was just a little more stilted. For Whom the Bell Tolls, on the other hand, was so tedious that it took me almost two months to read back in 2008 (so, to be fair, I was completing the last year of my engineering degree at the time).

This drinking binge of a book found me at exactly the right moment, though. All those blank spaces Hemingway leaves between words are the ultimate instance of showing, not telling. He tells you nothing, and so you're left with all the pain that you can imagine, just like in the best horror films. It's not that I can relate to Jake Barnes, it's that there's room within his experience for my own. (And oh, the torches I've carried.)

My raving is mostly because this book breaks what was almost a ten-book streak of List books that I either found mediocre or outright bad. The fact is that even though it evoked some big emotions, Hemingway does have a Woman Problem and, I'm increasingly convinced, a Race Problem. As usual I consider myself unqualified to talk about race, so I'll focus on the woman thing. I had a really hard time with Brett as a character. If you want to know where that trope of "she's using him because he's safe and she'll run away with the bad boy eventually," you don't need to look any farther than this. Brett is frivolous to an almost comical degree. Once again, I'm a victim of my lack of notes, because I can't point at any specific instances of nonsense. I really am trying to take more of them, I swear, I just haven't figured out a good system yet.

A big deal was made, all over the foreword and introduction (that as usual I didn't read), about how this novel is about the Lost Generation and that's cool but I don't really care all that much about it. If I've learned anything by being a member of the generation being demonized at the moment, it's that most things that matter aren't really generational.

Problems aside, if you carry your torches with you into this book, you won't regret it.

It is awfully easy to be hard-boiled about everything in the daytime, but at night it is another thing.

I thought I had paid for everything. Not like the woman pays and pays and pays. No idea of retribution or punishment. Just exchange of values. You gave up something and got something else. Or you worked for something. You paid some way for everything that was any good. I paid my way into enough things that I liked, so that I had a good time. Either you paid by learning about them, or by experience, or by taking chances, or by money. Enjoying living was learning to get your money's worth and knowing when you had it. You could get your money's worth. The world was a good place to buy in. It seemed like a fine philosophy. In five years, I thought, it will seem just as silly as all the other fine philosophies I've had.