46. The Secret Agent by Joseph Conrad

Year Published: 1907
Pages: 269
First Sentence: Mr Verloc, going out in the morning, left his shop nominally in charge of his brother-in-law.
Rating: 2/3 (meh) 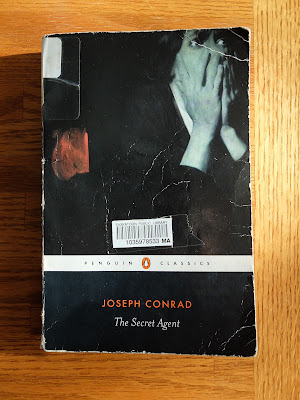 The Secret Agent is a man named Adolf Verloc. He's a spy for some government—the presence of "Mr Vladimir" implies the Russian government—who lives in London and owns a porn shop. At the beginning of the novel, Verloc visits Mr Vladimir, who urges him to carry out a bombing at the Observatory in Greenwich Park. Verloc doesn't want to do this, but Vladimir threatens his job, so he agrees. I couldn't really follow some of the details in terms of who Verloc was actually spying on, but what ends up happening is that he recruits his wife's mentally disabled brother Stevie to carry the explosives to the observatory, and then everything goes very, very wrong.

Though not as opaque as Heart of Darkness or as relentlessly boring-to-the-point-of-indifference as Nostromo, The Secret Agent did lose me a few times. See my above comment regarding not being able to actually figure out who Verloc was supposed to be spying on. The real strength of the book is the way the perspective shifts from Verloc onto his wife, Winnie. I'm trying to say that the book has a superb climax without giving too much away. If the whole thing had had that level of clarity, I would've enjoyed it a lot more, because the characters were a lot of fun throughout. In fact, while I'm not an expert on portrayals of disability in literature, I'll even say that Conrad's handling of the Stevie character was a lot more sympathetic than I would've expected from a book published in 1907. (Though not especially kind, given Stevie's fate.)

Having read four of Joseph Conrad's books now (where, if not for this project, I probably would've only read one at most), I have to say that I'm convinced it's his style that's the problem. Certainly the content of the books is often action-packed, Conrad just can't seem to convey that action in an exciting way. I hate to pick on him, though, because the man was writing in his third language, which he didn't speak fluently until his twenties. (The other two languages are Polish and French. Conrad the man is much more interesting to me than his books have been.) The prose is often ponderous, and holds the reader at arm's length. That's why it's such a marked improvement when the focus shifts to action in a scene or a character's immediate feelings about something. Basically Joseph Conrad is Not For Me. It's especially frustrating given that I've found his Author's Notes 100% more approachable and readable than the novels.

Anyway, the final comment to make about The Secret Agent is that it seems to have a reputation for being either prescient or modern in terms of its subject matter. And I suppose a person could make that argument, but it's not one that I would make. The paranoia (and the sense of global political instability—or maybe that's just my own paranoia showing) that characterizes the modern world is conspicuously absent from this novel. There's no sense that anything going on in the novel affects anything at all outside of the events depicted directly. I'm willing to grant that maybe, in my struggles with wrestling Conrad's prose into my brain, I simply missed a whole lot of subtext and/or text, but there you have it.

And the two gas jets inside the panes were always turned low, either for economy's sake or for the sake of the customers.
These customers were either very young men, who hung about the window for a time before slipping in suddenly; or men of a more mature age, but looking generally as if they were not in funds. Some of that last kind had the collars of their overcoats turned right up to their moustaches, and traces of mud on the bottom of their nether garments, which had the appearance of being much worn and not very valuable. And the legs inside them did not, as a general rule, seem of much account either. With their hands plunged deep in the side pockets of their coats, they dodged in sideways, one shoulder first, as if afraid to start the bell going.

Born of industrious parents for a life of toil, he had embraced indolence from an impulse as profound as inexplicable and as imperious as the impulse which directs a man's preference for one particular woman in a given thousand.

He had even gone so far as to utter words which true wisdom would have kept back. But Chief Inspector Heat was not very wise—at least not truly so. True wisdom, which is not certain of anything in this world of contradictions, would have prevented him from attaining his present position. It would have alarmed his superiors, and done away with his chances of promotion. His promotion had been very rapid.