Pairing: Teenage outcast girl and teenage boy who will never(?!) grow up
First Sentence: She stands on the cliffs, near the old crumbling stone house.
Climax: THEY DO NOT HAVE SEX THANK GOD I WAS SO WORRIED. -M.R. 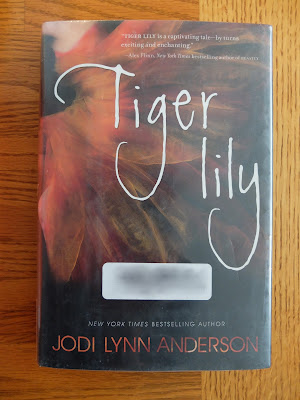 Some background, the gist of which is that I should really know better when it comes to so-called retellings by this point: I love Peter Pan. I love Peter Pan even though J.M. Barrie was supposedly a creeper. I was Tinker Bell for Halloween as a baby (this was obviously not a choice I made, but still), and almost was Peter Pan for Halloween a few years later if not for late 80s/early 90s parental gender policing. My sister and I were the only people who saw, loved, and remember 2003's Peter Pan movie (although I will say the kid who plays Peter is the weakest link in the whole thing, and the costume they put on him is a crime). I have even seen a Peter Pan ballet. I love Peter Pan. I'll get into its undeniable racism because I will be reading it immediately and reviewing it as my next Random novel.

Spoiler alert for the rest of the review, this is a case as with Wide Sargasso Sea/Jane Eyre (and that Alice book) where I do not particularly care for a reimagining/reframing of the source material. So let's get into it. There will be book spoilers all over the place here, because I'm assuming that everyone knows the rough outline of this story, and because I almost always spoil the romnovs.

Tiger Lily is about a romance that happens between Peter Pan and Tiger Lily before Wendy arrives in Neverland. Tiger Lily is a foundling taken in by the Sky Eater tribe on Neverland, which is an actual island somewhere in the Atlantic ocean in this book. Her adoptive father is the tribe's shaman, a two-spirit man (person) named Tik Tok. Tiger Lily is 15 years old, Not Like Other Girls, and doesn't really fit in with the tribe. Her outsider status leads to her breaking various rules.

First, she takes care of a shipwrecked man named Phillip. The Neverlanders are semi-immortal: they age until some arbitrary point—it's implied that they stop aging when something earth-shaking happens in their lives—and then they stop and they live until they die in an accident of some kind. Whereas Phillip is an "Englander" who has the aging sickness, which is to say he will age and die like a human. Everyone but the indigenous people (besides the Sky Eaters, there are the Bog Dwellers, Cliff Dwellers, and some very old people) and the pirates apparently come to Neverland via shipwreck.

Next, Tiger Lily gets involved with Peter Pan and the lost boys, whose origins are all cloaked in secrecy, and who are known to the rest of the islanders as being very dangerous. One of them apparently was kidnapped by pirates and abused in every way, however. So that's cool. They are teens, and it's not clear if they're aging like the other Englanders or not. They have a baby with them for some reason. Peter steals a necklace that Phillip gave Tiger Lily, and she goes to get it back from him. Because Tiger Lily is Not Like Other Girls, she runs around with the lost boys and gives as good as she gets, and whatever.

So, these two things lead to all the action in the novel. Because Tiger Lily visits Phillip, Tik Tok has to cave in to pressure to have her marry a gross dude named Giant, who is like 50+ years old. So this marriage is hanging over everything. When Tiger Lily and Peter Pan meet, they end up falling in love, and she neglects everything else in pursuit of this love. While this is going on, Phillip ends up moving into the Sky Eater village and acting as a missionary. He clashes with Tik Tok, who has long hair and wears dresses, which of course Phillip doesn't approve of.

A few days before Tiger Lily is supposed to marry Giant in a ceremony performed by Tik Tok, Phillip cuts Tik Tok's hair and destroys his dresses. Tik Tok shuts down, and Tiger Lily cares for him rather than running away from her wedding to be with Peter, which was what she'd promised. By the time she can visit Peter again, a ship has come from England with Wendy on board, to save Phillip. Peter likes Wendy because she's So Typical and also Pretty. Tik Tok eventually commits suicide, and Tiger Lily can't find Peter when it happens but does run into Wendy. Wendy tells Tiger Lily that Peter is thinking about leaving Neverland to go to England.

To get revenge, Tiger Lily approaches the pirates and offers to betray Peter so that they will kill him and Wendy. (I left out the part where the pirates are looking for Pan and the lost boys for no very clear reason, so Peter murders a pirate in cold blood and then the pirates find the lost boys' burrow and almost end up smoking them out and killing them if not for an impromptu treetop sleepover.) Of course Tiger Lily loses her nerve and she ends up saving Peter and Wendy, killing Reginald Smee, and just running back to her village.

In the end the Englanders leave and Tiger Lily gets married and Tinker Bell finds old man Peter Pan in London and I'll get into this ending a bit more in a sec.

A few things I liked about this book before I get into all of the things I didn't:

Some of the narration. The story is narrated by Tinker Bell, who can't speak but can take some action within the book. She is very small and very insect-like. I actually liked some of her little asides about catching insects or whatever else she was doing while being ultra-voyeuristic throughout the book. What I didn't like is this weird backstory she has where her father ran away with another woman (like, why?), and the poor definition of her actual capabilities before they matter within the story.

The characterization of Peter Pan. Basically the description of Peter as a scared but boastful and brash teenage boy is spot on. I have a lot of problems with Peter Pan being as old as he is in this (about 16) that I'll get into shortly, but everything about the way he behaves is perfect.

The pirates. Hook and his crew are gross and hopeless in this book. They're starving and desperate, which I suspect is closer to the reality of pirates than anything else that's come near Peter Pan.

And now for all those things that I found I needed to say when I finished the book.

The worldbuilding. In the original, Neverland is just a fantasy world that is reached by magic. It's so small that it can be completely circumnavigated with ease in less than a day. While I don't insist that such a setting could be retained in a story like this, the worldbuilding ends up leaving a lot to be desired. There's no indication of why the place is special. There's no exploration of how the weird aging would affect the people who live there. Does anyone get "stuck" as a five year old? Does anyone get stuck as an 80 year old? No clue. What are the cultural norms surrounding this? Are there cultural taboos about someone getting stuck at 30 years old getting married to someone who is stuck at 13 years old? Are children rare?

The Sky Eaters. The tribe in this book made me very uneasy. Like I said, the original is racist. But I'm not sure that this isn't also racist. I'm not really the person to write about this definitively, however. Native Appropriations gets into this sort of thing a bit re: Harry Potter, i.e. fictionalizing indigenous people is a delicate issue that should probably just not be undertaken by a white person. This is especially true given that, as noted, Anderson is locating her Neverland on the actual planet Earth. The inclusion of a two-spirit character is a great choice, but introduces a host of other issues (speaking of gender policing) with the way people judge Tiger Lily and her friend Pine Sap for transgressing arbitrary and unimportant gender norms.

The character assassination of Wendy Darling. Wendy has never been one of my favourite literary characters, but her treatment here is pretty unforgivable. I suppose one could allow that this is coming from Tinker Bell, who is in love with Peter herself and loyal to Tiger Lily, but no. Wendy is shallow and naive and her only redeeming quality seems to be that she supports Peter and she isn't so strong that she intimidates him and makes him feel occasionally inferior the way that Tiger Lily could. This is nonsense.

The character Moon Eye and the ending. At the end of the book, a shaman comes from another village to perform the ceremony of marrying Giant and Tiger Lily. It seems that this marriage isn't consummated, and shortly after it happens, Giant dies mysteriously. The character Moon Eye, who I'm just mentioning right now for the first time because she's just a plot device, is a sometime friend of Tiger Lily. She is sweet and gentle. She is in the book so that Giant can rape her repeatedly, and then she can poison him so that Tiger Lily won't have to be married to him for eternity. Later, Tiger Lily gets married to Pine Sap, who is her awkward, weak friend who has been pining (hurr) for her for years. It's implied that they have children, although it's never stated what age Pine Sap gets stuck at, but Tiger Lily is stuck at 15.

Peter Pan as an angsty teen. One of the first things I wrote above is how relieved I am that Peter Pan and Tiger Lily don't have sex in this book, because I think there was a real chance that it could've happened. The prospect of Peter Pan even touching a boob is one that I cringe to contemplate. This is the biggest problem with the book, I think. It isn't stated exactly how old OG Peter Pan is when he decides not to grow up, but from context I'd say that he's about 11ish, if not younger. The Peter Pan story is about a child who can envision growing up, and rejects it. A fifteen or sixteen year old is already growing up, writhing through the process emotionally and physically. The story of a teenager falling in love for the first time is fundamentally different from the story of Peter Pan. Especially (!!!) a story in which said teenager then proceeds to leave Neverland and grow up. As much as I love Hook, any story in which Peter Pan grows up is ultimately nonsense that fails to appreciate what makes him special and tragic and enduring.

So anyway, I certainly wrote way too much about this book. I'm sure that Anderson's intentions were good and sincere, but when it comes to the things that I love, I get very picky. Still, I now have an excuse to revisit Peter Pan, and that's great. I can't wait to write about it.