CANADA150: Discounted Labour by Ruth A. Frager and Carmela Patrias

In 1999, the Saskatchewan Union of Nurses (SUN) went on strike.  My mom was a member of SUN at that time, and I spent a few cold days on the picket line with her and listened to conversations between her and other nurses.  I was 12 years old, and I didn't fully understand the politics and procedures involved, but the whole experience was a formative one for me, to see first hand what collective action looks like, and especially collective action taken by a group consisting almost entirely of women.

Both of my parents have been pro-union throughout my life, and still are today. I've been a union member in the past (though never a member during a strike), and I'm pro-labour as well, which is, from my experience, rare for engineers.  Support for the labour movement seems to be shrinking.  Anecdotal evidence is that people feel that unions are no longer necessary now that labour standards are in place and that unions are wasteful and don't listen to their membership. In regards to the latter point, my rebuttal is that I wonder how much of the membership bothers to attend union meetings.

The former point, about labour standards rendering unions obsolete, is more interesting, and it's where this book, Discounted Labour: Women Workers in Canada, 1870-1939, comes in. 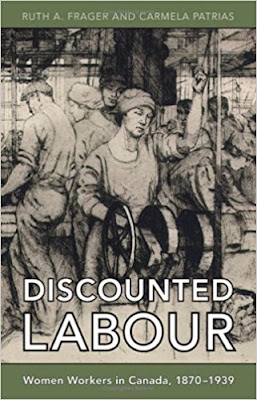 As it says on the tin, the book considers the question of what things were like for women working in Canada from the period just after Confederation until just before the Second World War. It makes for shocking reading, and whenever I picked it up I could be sure that I would feel a low level of rage for quite a while afterward.

If you don't know anything at all about work and labour during this period, here's the gist of it: employers did their absolute best to screw everyone, and they used gender, racial, and class divisions to screw everyone even harder by pitting them against one another. They simplified tasks as much as possible so that they could hire low-skilled workers for very low wages. Although men were tasked with being breadwinners, they often didn't make enough money to support their families, and therefore their wives and/or children had to go out to work as well. However, because men were breadwinners, employers used this excuse to pay women and children less than men. Seems logical, right? It gets worse.

If you're familiar with the old saw about how men do heavier and more dangerous work than women, know that in this period at least (and still), what women were considered capable of was entirely arbitrary. Domestic servants worked long hours, and were often subject to harassment from male employers whose homes they lived in. In some factories, they had to sit to protect their delicate health, while in others, they stood all day. In garment factories, men would have the higher status, more complex garment-making tasks, while at home many women were still making all of the clothes for their families. These double standards carried over into the few white collar careers available to women, such as teaching. In that case, women teachers were seen as inferior and less intelligent than their male peers, while simultaneously requiring less education because of their natural teaching and caregiving abilities. Nurses, on the other hand, enjoyed higher status and better wages because they went through an apprenticeship, and this higher status seems to have carried over to the present day.

And for women who were members of minority groups? Forget it. Employers didn't want to hire them, many women from the mostly Anglo-Protestant majority didn't want to work with them, and they were excluded from training. On rare occasions, segregation could work in their "favour," necessitating Chinese and Japanese nurses in Vancouver, or black teachers in Ontario and Nova Scotia.

The female workforce of this period seems to have consisted mainly of unmarried women between the ages of about 15 to 25, and the uptick in women workers wasn't really very large during the First World War. However, women were taking up jobs more and more throughout the years from 1870 to 1939, and during the Depression, there were actually calls for women to stop working and even to give their jobs to male relatives, as if that would solve all of the country's economic problems.

Finally: while there were small victories and a few advocates for women workers between 1870 and 1939, things just generally remained awful throughout. Reformers, including William Lyon Mackenzie King, had a variety of different reasons to fight for women workers. Some felt that working affected women's ability to bear children, for example. The reformers often came from the middle class and had a hard time understanding the actual issues that working class women faced. The women workers themselves had very little presence in the Canadian labour movement. They were often too busy to participate, working long hours and then returning to their homes to do housework. Some have theorized that organizing was not "ladylike," but it isn't clear whether this perception actually existed at the time among working class women. Unions sometimes excluded women because employers would threaten that if they had to raise the women's wages, it would mean keeping men's wages low.

What does all this have to do with modern unions? Basically, some employers will do whatever they can get away with, regardless of laws, because economic realities tend to trump laws, and workers have a hard time pushing back without organizing. For example, you better believe that if restaurant workers were unionized, we wouldn't still be having conversations that go nowhere about dress codes that require female servers to wear high heels.


Next up: Clearing the Plains by James Daschuk (it would have been another book about the labour movement, but I'm picking this up instead thanks to my local library's Read4Reconciliation program, and also because the year is only so long and I think it's a better idea to do a broad survey rather than a deep dive)
Posted by M.R. at 3/27/2017 12:00:00 AM