I've been at the library pretty frequently over the course of the last few weeks, picking up a frankly hilarious number of books to choose from for the Twelve Hectopages of Xmas. If I could read all of these books instantly, I'd be very happy, but of course that's not likely. I should mention that I'm also in the process of reading two other books: All the Light We Cannot See and A History of Celibacy, but if all goes well I should have at least one of those wrapped up early on. I decided to have twelve books in the stack this year for the sake of pretending it would be possible to actually read one per day.

I've put these in order of size, so let's have a look from smallest to biggest. 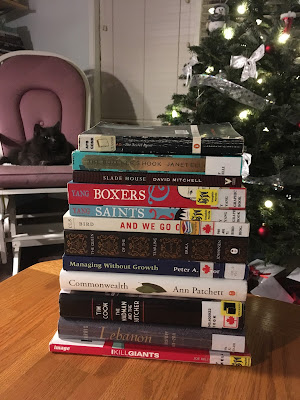 The Secret Agent by Joseph Conrad

This is the next book on the Top 100 that I'm due to read. Spoiler alert, but Nostromo was an ordeal and so I'm not particularly excited to immediately read another Joseph Conrad book, but this is what it's come to with respect to getting this project finished in the foreseeable future. I don't really know what this book is about but it actually does sound kind of intriguing.

The Butcher's Hook by Janet Ellis

Historical fiction about a young woman who wants to marry the butcher's apprentice but whose father wants her to marry someone else. I hope that this involves her killing everyone who gets in her way.

A haunted house story that may or may not be loosely linked to The Bone Clocks, which I read back in 2014.

And We Go On by Will R. Bird

A Saskatchewan (?) soldier's memoir about World War I. I've been wanting to learn more "Canadians in WWI" history and I decided that since we're currently in the middle of the centenary that there's no time like the present.

The Queen of the Tearling by Erika Johansen

This and Slade House are books that I borrowed from my sister rather than the library, and she says she wants to read this one soon, so I should get to it first. I believe this is a fantasy novel set in Earth's far future.

Managing Without Growth by Peter A. Victor

This book was mentioned in some of the criticism I read of Naomi Klein's This Changes Everything. It's about how to contend with changing the economy in response to climate change. I think.

Need to get to this one first thing because I don't think I'll be able to renew it at the library. It sounds like it's a family drama saga sort of thing. I've never read any Ann Patchett before so I'm very excited.

The Madman and the Butcher by Tim Cook

More Canadian WWI non-fiction, this one about a couple of the dudes in charge rather than the common soldier. My Canadian history knowledge is probably slightly superior to the majority of people in my age group, which is to say that it's abysmal, and I'm hoping that this book will fill some gaps.

With all of the information I've consumed about medieval Europe, I've been starting to crave more world history. Lebanon has been "on my radar," as it were, for a while, and after reading Fall on Your Knees earlier this year, I added some books to my reading list about Lebanon's history. This book actually wasn't one of them, but it's what I found at the library.

My memory of what this is about is a bit off. I believe it's about a kid who uses fantasy to deal with bullying?


And that's it! I'll be back with another update by Boxing Day.