First Sentence: When I stepped out into the bright sunlight from the darkness of the movie house, I had only two things on my mind: Paul Newman and a ride home. 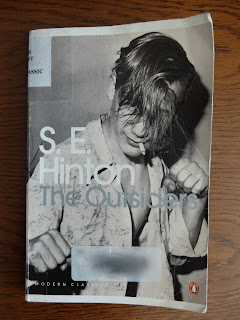 Someday maybe the teenager I was will forgive the adult I am for not getting around to reading The Outsiders before now.  It seems that my brother and sister both read this book at school, and I somehow completely missed it (like so many other classics, alas!).  But this would've been something that I latched onto and loved for years, I'm certain.  I know this especially considering the fact that this book was written and published while S. E. Hinton was a teen girl and has many of the hallmarks of teen girl writing and the "teen girl gaze" that I remember with a lot of fondness and some horror.

I am shocked even further by the fact that I've never seen Francis Ford Coppola's movie adaptation, starring so many young 80s hotties.

But here we are, and wow did I ever miss the boat on this one. The story of the Greasers vs. the Socs in smalltown USA (I pronounce this as "socks" in my head and I don't even care that that's illogical and incorrect) is narrated by Ponyboy Curtis, 14 years old and the youngest of the three Curtis brothers.  His oldest brother is named Darryl ("Darry") and his middle brother is named Sodapop.  Why do these boys have these names?  This is such a weird choice by the author.  In any case, the Curtis boys' parents are dead, and the three of them are now running with a gang of Greasers. When Ponyboy and another gang member, battered Johnny Cade, are attacked by the rival gang the Socials, Johnny ends up killing one of them in self-defense. This sparks off a series of dangerous, sad adventures for Ponyboy and Johnny.

The novel is all about how people are people no matter how long their hair is (no mention of skin colour, though, although I'm not sure if that has more to do with the demographics of 1960s Oklahoma or not). It also tracks family dynamics and how sometimes your friends are your family, and sometimes people will express their love in ways that might baffle you. Ponyboy is the youngest and smartest of the bunch, which allows him to have these revelations.  (But why is his name Ponyboy!?) The messages are unselfconscious, which is refreshing.

A lot of the characters are cute boys, and they're muscular and acrobatic and they love each other. Everyone gets a hair and eye colour.  I love that about this book.  I love the restraint teen girl writer S. E. Hinton shows in the female characters she includes, which is to say that none of them are obvious self-inserts. Other things are more strange and made me wonder, like how Ponyboy randomly, two thirds of the way in, mentions that he's a track star. This is a tiny spoiler for an old book, but the book is structured such that it's actually written by Ponyboy, and I can't help wondering whether that "oh yeah I forgot this important fact" stuff is intentional to evoke the feeling of a young teenager writing without a plan, or if it's because the book was actually written by a teenager.