Year Published: 1925
Pages: 288
First Sentence: When you came in the space was desultory, rectangular, warm after the drip of the winter night, and transfused with a brown-orange dust that was light.
Rating: 2/3 (meh) 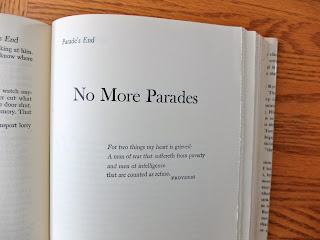 I finished reading No More Parades the day before writing this review, and gave it a 2/3 purely because I planned to push ahead into A Man Could Stand Up—, and didn't think I'd be justified in doing so if I gave it a 1/3 rating. In the extremely unlikely event that someone picked up No More Parades without having read Some Do Not... first, though, it would deserve to go straight into the garbage, because it doesn't exist independently of the first novel at all.

No More Parades at least takes us to the front of the First World War, sort of. Our hero from the first novel, Christopher Tietjens, is stationed near some town because his health is bad. He's a captain, in charge of "the draft." Relying entirely on context clues from the novel, because I'm not sure it really provides much in the way of information that a person could use for actual research, I believe that Tietjens' job in this book is to get soldiers coming over from England sent down to their positions on the front lines. Have all of these soldiers been drafted? That I don't know. One of the things I liked best about the novel, though, was the number of Canadians who appear throughout. Here at home we have our perceptions of Canadians at war, and it was interesting to read about them, even briefly, from a British perspective. (I haven't done a comprehensive survey yet, but I don't think a single novel by a Canadian author made it onto The List*, so I have to take my Canadians where I can get them.) I'll note that I also have no idea what exactly "parade" is.

Everything in the novel happens over the course of something like a 24 hour period. A man dies in Tietjens arms at the beginning and he recalls it throughout, and it upsets him and sends him into a spiral, but this barely registered with me because the prose is kind of unbearable, if I'm being honest. Afterward, Tietjens finds out that his wife Sylvia has shown up basically on his doorstep without notice, perhaps purely to torment him, but also because she's jealous of Valentine Wannop and being jealous makes Sylvia want to bone Tietjens. Or something. (Spoiler alert for Some Do Not...: at the end of the book Tietjens asks Valentine, who he loves, to be his mistress, she agrees because she loves him back, and then they ~!* FLASHING NEON SIGN *!~ do not.) As with the previous novel, there's a bit of a time jump that occurs partway through, jumping over a catastrophe which is then related by the characters in dialogue.

I'm trying my utmost not to compare this series to From Here to Eternity but God the comparisons almost demand to be made. Combined, Parade's End is a similar length, and it also includes the copious details that I hated so much in From Here to Eternity. Ford Madox Ford is unquestionably a better writer than James Jones, even if only because he doesn't throw three different adverbs in a row into every other sentence. I'm honestly not sure which one of them treats women better. Sylvia Tietjens is the only woman with a speaking role in this book and she is a strange character. I'm not sure if I'm supposed to hate her or if she's supposed to be symbolic of something, or what. She's cruel, but she's also ignorant about the war in a way that's simultaneously heartbreaking and frustrating.

So maybe this is all cleared up in the next book. But the fact is that as I tried to pick up that next book (or rather, open my compendium edition to the appropriate page), I decided that there was no way that I wanted to spend my time on any such thing. These first two books of the quartet were a slog, and I have no reason to believe that anything will change in the second half.

* And The Handmaid's Tale was published in 1985, so there's simply no excuse for this.**
** No, I'm not really suggesting that The Handmaid's Tale is the absolute best that CanLit has to offer***, just that it seems like a prime candidate for The List.
*** My representative sample of choice at the moment is As for Me and My House by Sinclair Ross.

Sylvia had refused to swear by St. Anthony. She definitely was not going to introduce the saint into her amorous affairs, and she definitely was not going to take on any relic an oath that she meant to break at an early opportunity. There was such a thing as playing it too low down; there are dishonours to which death is preferable. So getting hold of his revolver at a time when he was wringing his hands, she dropped it into the water-jug and then felt reasonably safe.

Men, at any rate, never fulfilled expectations. They might, upon acquaintance, turn out more entertaining than they appeared; but almost always taking up with a man was like reading a book you had read when you had forgotten that you had read it. You had not been for ten minutes in any sort of intimacy with any man before you said: "But I've read all this before...." You knew the opening, you were already bored by the middle, and, especially, you knew the end....