First Sentence: It is so appropriate to color hope yellow, like that sun we seldom saw. 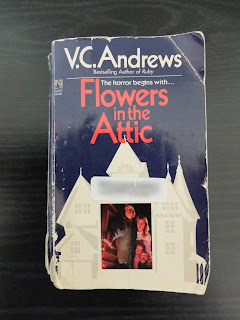 Review:
Very long time readers may remember that time that I read Apache Nights and sincerely enjoyed it. I’m going to say right off the bat that I felt the same way about Flowers in the Attic, except that Flowers in the Attic is also, by far, the trashiest book I have ever read or am ever likely to read.

Of course I knew this book by reputation, with my first introduction to it via a high school teacher, who I think saw one of the girls in one of my classes reading a different V.C. Andrews book. By the early twenty aughts, of course, the book had less notoriety than it did in the 80s, but many many people still know what it is now, fifteen years later.

In case you’re one of the few who doesn’t, the basic premise is that the Dollanganger family (Chris, Corrine, and their kids Christopher, Cathy, Cory, and Carrie) are all super happy until Chris is killed in a car accident. Christopher is in his early teens, Cathy is just approaching puberty, and the two younger kids, twins, are around five years old when this happens. It turns out that their parents were deeply in debt, so Corrine takes her family to live with her own extremely wealthy parents in order to try to wheedle her way back into her father’s good graces, and inherit his money. He is supposedly on the brink of death. When they arrive at Foxworth Hall or whatever it’s called, Corrine reveals that her children will have to stay locked up in a room that leads to the mansion’s attic for a “short while” until she can reveal them to her father, because it turns out that Chris, their dead father, was Corrine’s half-uncle, and they were married and had children very much in opposition to Corrine’s parents’ wishes, plus had been living under an assumed name.

I’m sure you can see what’s coming.

Basically, the kids stay locked up for years, increasingly neglected by their mother, and under the watchful and cruel eye of their grandmother. The two older ones, Christopher and Cathy, are also increasingly aware of each other’s burgeoning sexuality and developing bodies.

I was inspired to finally pick up this book after watching the strangely compelling trailer to the new Lifetime adaptation of the book, and got a disturbingly battered copy from the library (pictured above), with SPOILER ALERT FOR THIS AND BEYOND the sex/rape scene between Christopher and Cathy slightly dogeared. I zoomed through the book in a matter of days.

So like I said, this is trash, but it was so entertaining. The prose is a very rich purple, and Andrews does a good job of livening up a pretty boring setting, when you really stop to think about it. At one point, she just skips over a year. Like “winter came, then spring and summer, and we had been in the attic for two years,” or something like that (it’s not a direct quotation). The whole thing is just so absurd and taken so seriously but also not at all.

The thing is, though, what is the deal with the incest? Why are people so into this? All the stuff about being in the attic and terrorized by an evil old woman, waiting for an old guy to die, general misery and rage is great, but I found the brother/sister stuff reeeally off-putting. I suppose it could happen under these circumstances (and has happened under others), but, like, that isn’t ok. I actually read the Wikipedia summaries of the whole series before I read this book, and was surprised to discover that Christopher rapes Cathy, which I didn’t think anyone was under the illusion of finding romantic or even titillating. I thought that maybe he rapes her in the sense that any incest could be considered rape. (Nope, he straight up rapes her too.) There are people who might find this romantic because of the desperation between the two siblings or something but like... these people can’t possibly have brothers, can they?

All this aside, you know what I actually found most unrealistic and jarring about the book? Cathy aspires to be a ballerina. It’s like her number one goal and she practices in the attic throughout the book, even going so far as to cut the tops off her leotards when they don’t fit anymore and letting everything hang out I guess. But she also aspires to be curvy and soft and sexy. Anyone with even a slight familiarity with ballet should know that curves are anathema to ballerinas. So unrealistic!

Anyway, this is basically the literary equivalent of the so-bad-it’s-good movie (a much harder balance to strike in books, from my experience), so if you like those, you’ll probably enjoy this.

I stared up at the sky. It seemed to me like an inverted deep bowl of navy-blue velvet, sparkled all over with crystallized snowflakes instead of stars—or were they tears of ice that I was going to cry in the future? Why did they seem to be looking down at me with pity, making me feel ant-sized, overwhelmed, completely insignificant? It was too big, that close sky, too beautiful, and it filled me with a strange sense of foreboding. Still I knew that under other circumstances, I could love a countryside like this.