What I'm Reading: We Band of Angels by Elizabeth M. Norman

Several years ago now, I read an a news post on The A.V. Club about yet another movie or miniseries about soldiers in the Second World War. Band of Brothers and The Pacific are both very much worth anyone's time, but many of the commenters mentioned how this WWII soldier story is maybe a bit overdone. They wanted to see more about the First World War instead, or maybe the Eastern Front. And then someone mentioned the story of the nurse POWs in the Philippines, and I added We Band of Angels to my reading list. 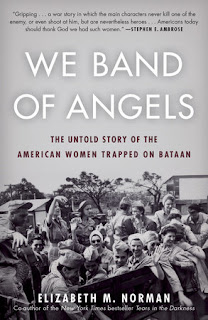 As part of my efforts not to let anything languish on my to-read list for too long (hopefully this link works), I finally picked up the book, and yep, I'd totally love to see this movie.

More seriously: almost a hundred army and navy nurses were taken prisoner by the Japanese in the Philippines in 1942. These nurses went through combat and then through additional hell in internment camps. They were liberated in early 1945, and bore the scars of this experience for the rest of their lives. Elizabeth M. Norman interviewed twenty of the women, and used diary entries, letters, and other records and testimony to write her book about the so-called "Angels of Bataan."

I thought the book was great. I teared up a couple of times, because veterans bring tears to my eyes more reliably than anything else. My mom has been a nurse for most of my life, and nurses are definitely a special breed that I am not a part of. The kind of single woman who would (a) become a nurse, and (b) join the army in the first part of the 20th century is bound to be interesting and the only thing I could've wished for from this book is a bit more context about the social forces around these women as they became nurses and left for an unknown country.