What I'm Reading: A Natural History of the Romance Novel by Pamela Regis

I'm positive that Anna DeStefano hasn't thought of me since our rather awkward encounter in 2010, but if she were to find herself on my little blog again I hope she'd be pleased to note that I've had something of a change of heart since then when it comes to the romance genre. I still don't care for it, but I'm also really curious about it, and thanks to very cool people (mostly just Jenny Trout, honestly), I take it a bit more seriously. Having read Tania Modleski's Loving with a Vengeance waaay back in 2012, I finally got around to reading Pamela Regis's much more current A Natural History of the Romance Novel this month. 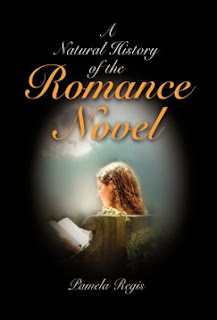 Regis presents the essential elements of the romance novel, and then examines both classic and 20th century examples of the form according to those elements. These works include Jane Eyre and A Room with a View, two books that I love immensely, as well as a bunch of others that I'd like to sample and review. (Exception: Janet Dailey. Regis reviews several of her works, but notes that later in her career, Dailey plagiarized from Nora Roberts, and therefore I'm not interested in reading any of them. Also fun fact, I remember seeing people reading Janette Oke's books when I was in high school and somehow I had confused these two writers in my mind until I was grabbing links and checking spellings for this post.)

Regis's defence of the romance genre is a good one, even though I didn't entirely agree with it. She points out that the modern works still contain all of the same elements as the classic examples, but the heroines have evolved along with the modern woman. I agree with all of that except that I'd argue that what makes the classic examples so much more fascinating and moving is precisely the fact that their heroines are not modern, and therefore the stakes are so much higher for them.

Anyway, I feel really committed to exploring the 20th century romance novel further after having read this, with an aim to looking at some of its better examples. Hopefully you'll see that reflected in my reviews once I've cleared out the backlog from the past couple of years.
Posted by M.R. at 4/25/2016 12:00:00 AM