First Sentence: A throng of bearded men, in sad-coloured garments and grey steeple-crowned hats, intermixed with women, some wearing hoods, and others bareheaded, was assembled in front of a wooden edifice, the door of which was heavily timbered with oak, and studded with iron spikes. 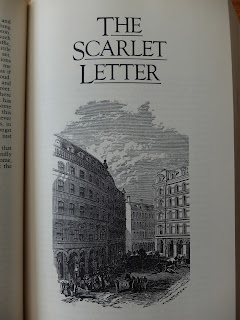 Review:
The Scarlet Letter was the book that I was most nervous about revisiting for my season of favourites, and I ended up reading it after a significant break, mostly because of travelling and the fact that my copy is in a larger Nathaniel Hawthorne collection that isn't easy to transport all over the place. But a not-insignificant reason was that I just couldn't remember very well why I've counted this book in my favourites for so long.

To begin with, I first came to this book via an usual route. I don't remember what I was watching on tv one day, but basically it was a dramatic presentation of The Customhouse (a ridiculous introduction to the novel proper that is inexplicably detailed with regard to the operations of the customhouse in Salem, and not essential at all), and there was a shot of the scarlet letter being removed from a trunk, and somehow that hooked me. I don't remember exactly when I finally picked up the book, but like the others, it was sometime before I finished high school. The reason I think that this history is bizarre is just because I'm a little baffled as to how I managed to come to one of the more famous works of American literature via some throwaway thing on tv.

The Customhouse did nothing to reassure me on this reading about my taste as a teenager. Fortunately, once I got through that, I understood immediately why this book became one of my favourites years ago. I didn't remember many plot details, but there are a lot of striking images in it that I kept waiting for, and that didn't disappoint at all when they arrived.

In case you're unfamiliar, a brief plot summary: in mid 17th century Puritan Boston, Hester Prynne is a young woman with a bit of a problem. She travelled to America from the Old World in advance of her husband, and although her husband didn't turn up for years afterward, she somehow managed to end up having a baby. Although they could have easily just sentenced her to death, the Puritans decide that instead she will be made to wear a scarlet letter A on her chest for the rest of her life. As if this weren't bad enough, just as Hester's shame and sin is being exhibited to the public for the first time, her husband appears from out of the wilderness. He swears her to secrecy about his identity, and then makes it his mission to find the father of Hester's baby (another secret she's kept) and torment him.

This is barely a spoiler for a 150+ year old book, but the father is totally the Reverend Arthur Dimmesdale, a young priest in the community. In my opinion that becomes pretty clear early on.

The reason that I love this book is because it's so odd. It is 100% about sex. It has a lot of other themes and subjects, of course, like shame and sin and penance and revenge and punishment and blah blah blah. But there's this crazy tension between the language of the book, which could never be set down by a modern writer with a straight face, and that initial sin committed by Hester Prynne and Arthur Dimmesdale*. I'm sure I'm not the only reader who just couldn't help thinking, while reading all their scenes together, "These two totally boned!!!!" The book opens with Hester's humiliation, when she's already had her baby, and the two of them are put up on the pillory in the town square for everyone to look at, and there are never any flashbacks to the passion between her and Arthur that led to that point. Many years pass before they speak privately again, and it's a beautiful scene in the woods.

I find Hester Prynne heroic as well. Hawthorne spends a lot of time talking about the pain that she's been through and how it has affected her as a woman. I don't know enough about Hawthorne's politics to be able to definitively say whether or not he's on her side, but I certainly am, so it seems to me that he is as well. Obviously she has no choice about whether to reveal her sin, whereas Dimmesdale does, and although she could run away somewhere and take off the scarlet letter, she instead stays in Boston and does embroidery for everyone except young brides. What I'm trying and failing to get at is that she lives through a ton of bullshit and somehow comes through that with good posture, if not serious harm.

The strangest thing by far, though, is Pearl, Hester's baby girl. I think she's my least favourite part of the book, actually, although she has her moments. In some of them, she actually behaves like a real human child, whereas most of the time she's portrayed as some sort of fairy demon, and although I get it, I just didn't enjoy it that much.

So yeah, I had no reason to be afraid, this is still a favourite. I'll be skipping The Customhouse on future rereads, though.

* In case it wasn't clear from other reviews I've done and posts I've written, I have no issues with sex outside of marriage, and although I'm not pro-cheating on one's partner, in this case I'd buy that Hester considered her husband to be dead so would absolve her on that one too.

He looked like the darkly engraved portraits which we see prefixed to old volumes of sermons; and had no more right than one of those portraits would have, to step forth, as he now did, and meddle with a question of human guilt, passion, and anguish.

It is a curious subject of observation and inquiry, whether hatred and love be not the same thing at bottom. Each, in its utmost development, supposes a high degree of intimacy and heart-knowledge; each renders one individual dependent for the food of his affections and spiritual life upon another; each leaves the passionate lover, or the no less passionate hater, forborn and desolate by the withdrawal of his object.