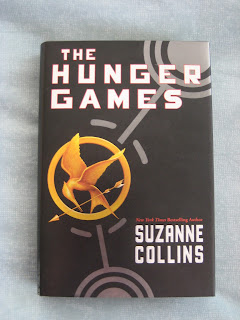 Review:
I originally wanted to review this book before I read the other two books in the trilogy, but considering that it only took me a day to read The Hunger Games and I had the rest of the trilogy on hand, I ended up reading all three in quick succession. I'm going to try to just review The Hunger Games, though, and keep it spoiler free, although given that it's a trilogy and Katniss narrates the book in first person (present tense, ugh), you may be able to guess at least a little bit of the ending.

Katniss, by the way, is Katniss Everdeen, a 16 year old girl living in District 12, which is the coal mining district of Panem, a country ruled by a frivolous and wasteful capital called, unsurprisingly, the Capitol. Everyone outside the Capitol lives in a state of privation. Katniss' family in particular struggled after her father's death in a mining explosion. Fortunately for Katniss, her mother, and her sister Prim, Katniss' father taught her to hunt before he died, so she has been able to support them on a steady diet of squirrels and water lily roots for the past half dozen or so years.

The Capitol keeps the Districts in line by forcing each of them to supply a boy and a girl between the ages of 12 and 18 to participate in the annual Hunger Games, where the 24 children from the 12 districts are put into an arena to fight to the death. The whole event, including the selection process and training of the "tributes," is televised. Katniss' sister is chosen to go, but Katniss volunteers to go in her place.

From there everything basically unfolds as you would expect. The major beats are pretty predictable for sure, but I did find myself surprised at several points, including the end of the Games themselves. The book works well as a unit without the two sequels, but they're ok, too.

Collins is a decent writer although not spectacular, and the book doesn't have anything particularly profound in it. She does better with action than she does with world-building and characterization, which isn't necessarily a problem but still means that the book doesn't pack anywhere near as much of a punch as The Long Walk does.

Still, considering that the alternative YA megaseries right now is still Twilight (I think?), Katniss makes a good Strong Female Character and the books certainly aren't a waste of time to read.
Posted by M.R. at 12/10/2013 12:00:00 AM