At the beginning of this month, I said I'd write some longer Current Distractions posts. So here we are, and let me tell you, it's been a busy month. Sort of.

IRL-wise, I've been at home most of the month, although I did have to return to The North for one (hopefully) last tour. (That got me thinking about how badly I need to write a couple of different Supplemental posts, so hopefully I'll have those ready to go soon.)  Before my trip, some jerk was kind enough to smash one of the windows of my car for me. They didn't steal anything, which was almost more insulting than the alternative. So I've been feeling even more misanthropic than usual ever since, and it's not pretty.

Reading
The first Saturday of May is Free Comic Book Day, which I finally actually participated in for the first time this year. I bought volume 3 of Gabriel Rodriguez and Joe Hill's Locke and Key series, and got ten free comics!

I've since read the Locke and Key book, and enjoyed it a lot. I still find this medium confusing and hard to appreciate a lot of the time, but this series is pleasantly creepy, and I think that the characters are great. And I don't know anything about art, but I think Rodriguez does a great job.

I also read the fourth book in the Dark Tower series, called Wizard and Glass. People seem to have varying opinions on this book, but I thought it was pretty good but didn't enjoy it as much as the earlier books in the series. The pacing is slightly off and it kind of drags in the middle. Still, the witch Rhea is spectacularly disgusting (she licks her cat[!!!!!]), no one can write adolescence like Stephen King, and the whole book is a great bit of backstory that establishes the character of the Gunslinger a lot more firmly. (NB: I did review The Gunslinger, I just haven't gotten to it in the posting order yet, obviously.)

Currently I have a romance novel on the go (The Thorn Birds), which I'll be reviewing "formally," and a non-fiction book about scientific progress (The Beginning of Infinity), which I'll have more details about next month, most likely.

I wasn't organized enough to finish rewatching Arrested Development before the new season, so I haven't seen it, but I will soon!

And finally, I saw Star Trek: Into Darkness. I'm one of the apparently rare people who thought that Star Trek 2009 was pretty great, with some exceptions (Winona Ryder, Kirk getting command of the Enterprise after about three years as a Starfleet cadet and a day or two of command experience). But ST:ID was 75% of a great movie and 25% of a terrible one, which resulted in 100% meh. As a Trek fan, I'm pretty disappointed, while at the same time conceding that I dislike pretty much all of the other Star Trek movies, so it isn't actually that important. It's a franchise that belongs on tv, and will hopefully return there soon.

I hope everyone out there had a nice month of May!  Here are some flowers. 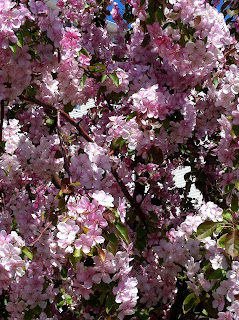