73. The Day of the Locust by Nathanael West 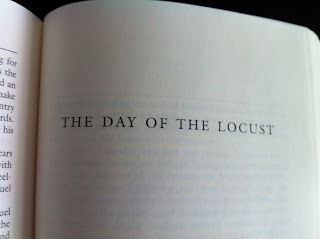 Review:
Because I only read four Top 100 books last year, and liked them all ok except for Finnegans Wake, I feel like it's been a really long time since one of the List books thoroughly discouraged me. But I didn't like The Day of the Locust, at all.

The book is kinda sorta but not really the story of some men who are all interested in this girl named Faye Greener. The point of view characters are Tod Hackett, an artist who is painting backdrops for early Hollywood films, and Homer Simpson, a weirdo who is randomly living in Hollywood on his vast savings. I'm not kidding about the name, by the way, although I can't confirm whether it's just a spectacular coincidence or not.

Nathanael West's writing isn't bad, but the story is nonexistent and the characters are no fun to spend time with. The book has a very episodic structure and I wasn't comfortable or entertained with any of it. From my point of view, it fails as a snapshot of a Hollywood era. It lacked in richness of detail and in context. There's an extended bit involving a cock fight that was incredibly unpleasant and then boring, which basically applies to the entire experience of reading the book (see also Tobacco Road for me being a bit more generous to a horrible, boring book).

Also, Tod Hackett has rape fantasies about Faye, and let's talk about that really quickly. Early in the book, their relationship is described in words that are pretty much the exact definition of the "FRIEND ZONE," which was funny until I got to the bits where Tod is fantasizing and even attempting to take action to rape Faye. This was odd and upsetting to read, but I'll allow that, if it's meant to illustrate something or whatever, and I guess that's the case here (what I mean is that the book loses more points for being boring than for being gross). Still, it got me wondering: are men "allowed" to have rape fantasies in which they're the aggressors? Is that different from women who fantasize about being raped? I would say yes, because there's a difference in agency and intent, plus rape culture blahblahblah, but this is something that randomly occurred to me while I was writing my notes on the book, and now I'm sort of curious what others might think. In the case of the book, the fact that Tod has serious intent and takes action beyond the fantasy is clearly a bad thing.

On a lighter note, you can avoid all of this by not reading the book, and you won't be missing anything good.

He had been in Hollywood less than three months and still found it a very exciting place, but he was lazy and didn't like to walk.

It is hard to laugh at the need for beauty and romance, no matter how tasteless, even horrible, the results of that need are. But it is easy to sigh. Few things are sadder than the truly monstrous.