Uncomfortable Plot Summary: Beethoven and an anonymous Italian's murder provide the impetus for a love story. 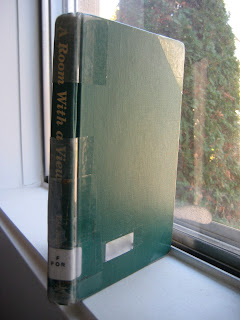 Review:
I very nearly gave this book a 2, but the more I've thought about it while getting ready to write this review (while procrastinating on writing this review, actually), the more I realize I really liked the book, and it's sticking with me, especially the very last scene, which I won't tell you about.

Lucy Honeychurch is a young woman travelling in Italy with her cousin, Miss Charlotte Bartlett, who is an old maid (probably around 35 years old or so), as chaperone. The book opens with them lamenting the fact that the rooms they've been given in Florence have no view of the city. A horrendously uncouth old man gallantly offers up the rooms he and his son occupy to the two ladies, which sparks discussion among all the guests at the pension, Miss Bartlett's great dismay, and Lucy's bewilderment. Because, you see, Lucy is basically an innocent country girl and also somewhat strange, still trying to figure out how to deal with the world on her own terms and those of her crazy, repressed society.  (A lady can't say the word "stomach" in a man's presence, for example.)

But my tone is too sarcastic, and my summary is too detailed so far.

The horrendous (actually very sweet) old man is named Mr. Emerson, and his young, sad son is George. The two of them seem to live outside of the social norms, and because the pension is so small, and tourists have such a limited territory, Lucy and her cousin are unable to avoid them after the room debacle (Charlotte is convinced to allow the switching of rooms, somehow). Eventually, Lucy goes out alone on a whim, and ends up witnessing a murder of some random Italian. George happens to be in the vicinity, and escorts Lucy back to the pension. During this walk, they experience a strange sort of tacit bonding, which will bring both of them no end of trouble. Later, on an excursion out of town, George HORROR OF HORRORS kisses Lucy. She and Charlotte flee Florence and go to Rome the next morning.

Back in England several weeks later, Lucy ends up engaged to some terrible dude whose name I haven't bothered to remember. He is clearly the worst possible match for her. And then the Emersons show up again, and...

You can read it to find out how it ends.

(George and Lucy are the names of a couple we met before in The Magnificent Ambersons. That book was written about ten years after this one, though, so I'm not sure if that's supposed to be some sort of weird literary reference or if it's just a coincidence because there were only five names to choose from at the time.)

Lucy is this great mercurial sort of character, who has a tremendous amount of passion and good sense. I think she'd actually make a good friend; I can imagine having really great hangouts with her and Jane Eyre. The Emersons are also really fascinating. As I mentioned before, they're a bit out of step with their time, apostate proto-feminists with socialist tendencies. I'll admit I have a bit of a crush on George.

I think by far the most interesting character, though, is Reverend Beebe. He shows up first at the pension in Florence. He's a youngish Anglican priest who originally met Lucy when she was at school, and who is in Italy for short time before moving to Lucy's, err, area to take up duties there. So he appears again in the English countryside along with the Emersons, as both an ally and antagonist to Lucy. He's portrayed as being a lot more jolly than most priestly types, more open-minded and generally an all-around cool guy. However, as the book progresses, you see that he actually has these really conservative beliefs surrounding vocations and celibacy. (As an aside, I'm not sure if the Church of England has the same notions about vocations as the Catholic Church, but basically Catholics talk about "vocations" as callings to different paths in life, e.g. marriage, the priesthood, religious orders, etc. and that's what I'm talking about here.) Basically, he believes that celibacy is the highest calling, and that nothing else is as good. This reminded me a lot of The Song of Bernadette, where the future St. Bernadette just wants to get married and have babies, and everyone around her says GOOD GOD NO A VISIONARY CANNOT BE DEFILED YOU HAVE TO BECOME A NUN. P.S. read The Song of Bernadette. In Catholicism, all vocations are technically created equal, and as long as you're not doing something evil like fornicating, then you're ok. Supposedly. But essentially what I'm trying to say is that while Rev. Beebe seems really progressive, he's actually just like the rest of the repressed society around him.

The style of the book is very deceptive in that it feels extremely modern. The Emersons seem like the product of a mind from the 70s or 80s, not 1908. So I'm really looking forward to the upcoming books by this author. And actually, before I realized that the book was so old, I was kind of annoyed by yet another modern author putting the spin of modern attitudes onto the past. Oops! There's a lot of hilarity in the book, too, by the way, especially in the descriptions of tourists (who apparently haven't changed at all in a hundred years) and the pretense of the "English colonists" in Florence.

In closing, this book wasn't earth-shattering, but it was beautiful and funny and thought-provoking. It didn't punch me in the gut, but it made me smile. If I initially mistook that reaction for something less than stellar, I've changed my mind now.

How often Lucy had rehearsed this bow, this interview! But she had always rehearsed them indoors, and with certain accessories, which surely we have a right to assume. Who could foretell that she and George would meet in the rout of a civilization, amidst an army of coats and collars and boots that lay wounded over the sunlit earth? She had imagined a young Mr. Emerson, who might be shy or morbid or indifferent or furtively impudent. She was prepared for all of these. But she had never imagined one who would be happy and greet her with the shout of the morning star.
Indoors herself, partaking of tea with old Mrs. Butterworth, she reflected that it is impossible to foretell the future with any degree of accuracy, that it is impossible to rehearse life. A fault in the scenery, a face in the audience, an irruption of the audience on to the stage, and all our carefully planned gestures mean nothing, or mean too much. "I will bow," she had thought. "I will not shake hands with him. That will be just the proper thing." She had bowed--but to whom? To gods, to heroes, to the nonsense of schoolgirls! She had bowed across the rubbish that cumbers the world.
Posted by M.R. at 10/29/2011 08:27:00 PM