84. The Death of the Heart by Elizabeth Bowen

I was using Amazon Associates to easily link to book covers, but it looks like ad blockers don't like that very much.  So instead, I'm going to start using my limited photographic abilities to just take pictures of the actual books I read.  Warning: they're not very interesting-looking editions most of the time. -M.R. 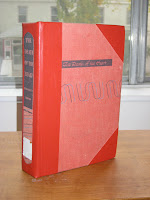 Uncomfortable Plot Summary: An angsty teenager runs away from home.

Year Published: 1938
Pages: 418
First Sentence: That morning's ice, no more than a brittle film, had cracked and was now floating in segments.
Rating: 1/3 (don't bother)

Review:
Like Tobacco Road, I was really torn about the rating for The Death of the Heart, but not for the same reasons. Tobacco Road got 2/3 because I ended up deciding that the bad taste it left in my mouth was less important than its intent to leave a bad taste in my mouth. The Death of the Heart fails because although the subject matter is pretty intriguing, the book is just downright boring. It may approach some great truth about the loss of innocence and/or THE DEATH OF THE HEART, but I couldn't convince myself to care about it much. Still, it was more of an Ironweed than a Ginger Man in the end.

Portia Quayne is the main character. She's recently orphaned and spending a year living with her half-brother, Thomas, and his wife Anna, who are both terribly bizarre and even just terrible, actually. The intriguing thing is that Thomas' parents got divorced and his father married Portia's mother, his pregnant mistress. And while divorce hardly shocks anybody these days, I don't think it was quite as common in 1925 or so, when Thomas' parents would've done it.

Elizabeth Bowen doesn't waste any words on it, thought, so maybe I'm mistaken. Anyway, Portia, who's about 16, ends up falling in with Anna's friend Eddie, 23ish, who basically just uses her as entertainment, though things quickly mean more to her, since she's lonely and innocent and unloved.

There was one really good passage in this book, and here it is:

I'm not sure if the exceptional nature of it will come through out of context, but that tiny little bit is one of the most honest and accurate things I've ever seen written about little girls. They're one of the most maligned of groups, seldom depicted naturally, with a capacity for adventure equal to that of little boys. It's not really exceptional, but is almost always neglected. Really, this passage alone almost earned the book a 2/3 rating.

But no. I can't even think of anything else to say, it was that lacklustre.

Quotations:
Nothing arrives on paper as it started, and so much arrives that never started at all. To write is always to rave a little—even if one did once know what one meant, which at her age seems unlikely.

There is no fidelity like the fidelity of the vicarious lover who has once seen a kiss.